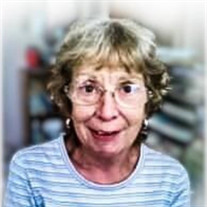 Judith Elaine (Zirjacks) Farrell, age 79 of Chanute, Kansas, passed away Friday, October 29, 2021 at Centerpoint Medical Center in Independence, Missouri. She was born on July 30, 1942 to Homer and Opal (Duggan) Myer. Judy grew up in Iola and throughout her life maintained a strong relationship with her faith and her church. She worked as an accountant for many years for K-State Farm Management until her retirement. On April 28, 1960, Judy married Walter Zirjacks. Together, they had two children Amy and Kevin. Judy was always doing the most that she could for her children and any of their friends that she could help. Her selflessness was unmatched from volunteering in her parish at St. Patrick’s in Chanute through the Altar Society and Harvest House to feeding and caring for all of Amy and Kevin’s friends, no matter what the need may have been. She made it a goal to maintain good health so that she could provide that love and selflessness to others. After Walter’s passing in 2003, Judy met through her church and married her new best friend, James Farrell. They have shared a companionship strong in faith and love ever since. Judith is survived by: her husband James Farrell, daughter Amy Zirjacks-Kennedy of Afton, OK, son Kevin Zirjacks and his wife Amy of Olathe, KS, sister Ann Lewis of Topeka, KS, five stepchildren, Mike Farrell of Colorado, Jeff, Andy and Tony Farrell all of Wichita, KS and Rita Farrell of Chanute, KS six grandchildren: Hyson Zirjacks, Logan Zirjacks, Kyle Zirjacks, Owen Kennedy, Ethyn Kennedy, and Haydon Kennedy, and five great grandchildren. Judith was preceded in death by her first husband Walter Zirjacks, her parents, sister Debbie Humphries, and great granddaughter Liberty Faye Kennedy. Memorials have been suggested to St. Patrick's Catholic Church in Chanute, KS and can be mailed to or left with the funeral home. Visitation will be held at Countryside Funeral Home in Chanute, KS on Wednesday, November 3, 2021 from 6-8pm. Rosary will be held on Thursday, November 4, at 9:30 am with mass to follow at 10:00 am at St. Patrick's Catholic Church in Chanute, KS. Services entrusted to Countryside Funeral Home, 101 N. Highland, Chanute, KS 66720.

Judith Elaine (Zirjacks) Farrell, age 79 of Chanute, Kansas, passed away Friday, October 29, 2021 at Centerpoint Medical Center in Independence, Missouri. She was born on July 30, 1942 to Homer and Opal (Duggan) Myer. Judy grew up in Iola and... View Obituary & Service Information

The family of Judith Elaine Farrell created this Life Tributes page to make it easy to share your memories.

Send flowers to the Farrell family.