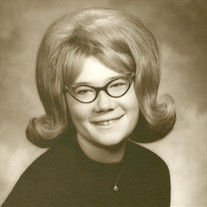 Judy Ann “Judy” Hoffman, age 69 of Chanute, KS, passed away on Thursday, October 10, 2019 at Diversicare in Chanute, KS. Judy was born on July 10, 1950 in Chanute, KS the daughter of James and Lila (Coble) Chaney. She graduated from Dallas High School in Dallas, OR in 1968 and then from Beauty School 1969. Judy was joined in marriage to Ralph Byron Hoffman on June 8, 1978 in Miami, OK. Judy worked as a hairdresser for over 30 years. She enjoyed crafting, quilting, gardening, antiquing, canning, baking and cooking. She was amazing cook and enjoyed passing on the recipes to her family. Judy most of all loved her family and her dogs and she treasured all the time she had with her grandchildren. She will be greatly missed. Judy is survived by: Husband: Ralph Byron Hoffman Children: Russell Tarvin and wife Shannon of Asbury, MO Randall Kennedy and wife Amy of Grove, Oklahoma James Hoffman of Thayer, KS Brothers: David Chaney and wife Teresa of Garden City, KS Don Chaney and wife Jean of Buffalo, KS 10 Grandchildren 3 Great Grandchildren She was preceded in death by her parents and sister, Pamella Johnson (Chaney). A visitation will be on Wednesday, October 16, 2019 from 5-7 p.m. at Countryside Funeral Home Johnson Chapel in Chanute. Funeral service will be held on Thursday, October 17, 2019 at 10 a.m. at the Countryside Funeral Home Johnson Chapel in Chanute, KS. Burial will follow at Memorial Park Cemetery in Chanute. Online condolences may be left at: www.countrysidefh.com. The family suggests memorials to be made to American Cancer Society and may be mailed to the funeral home. Arrangements have been entrusted to Countryside Funeral Home, 101 N. Highland, Chanute, KS 66720.

The family of Judy Ann Hoffman created this Life Tributes page to make it easy to share your memories.

Send flowers to the Hoffman family.