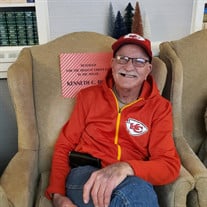 Kenneth Charles Boyd, age 70 of Chanute, passed away on Saturday, June 6, 2020 at his home. Ken was born on May 10, 1950 in Yates Center, KS, to James Henry and Kathryn Mae (Mulsow) Boyd. He graduated from Yates Center High School in 1968. In 1975 he began a career at NuWa Industries in Chanute, which lasted for over 30 years, and allowed him to hone and utilize his gift of woodworking. In 1973 Ken married Doris Koester. They raised two daughters, Ann and Stacy. While they divorced in 1995, they remain good friends. Ken’s number one passion was his children, grandchildren, and great-grandchildren. He made each one of them feel like he was their biggest fan, truly engaged in whatever they wanted to talk about, show him, or do with him. He was known by everyone for his kindness, gentleness, and selflessness. In the last year and a half, he became very involved in Grace Community Church, where he was diligently seeking to grow in his relationship with Jesus and was very loved by his church family. Ken’s other loves included his dogs, playing pool, riding motorcycles, and last but definitely not least his life-long love for the Kansas City Chiefs. Ken is survived by his daughter Ann Boyd-Bash, son-in-law Leon Bash, daughter Stacy Galt, son-in-law Steve Galt, and his beloved dog Joey. He is also survived by his six adored grandchildren (Kylie Boyd, Kenzi Boyd, Kaden Bash, Karli Bash, Hannah Galt, and Josiah Galt) and 3 great-grandsons (Layne, Logan, and Brayden Felkins). All were blessed to live with him in Chanute. He was preceded in death by his parents, sister (Geri Daly), grandparents, and many aunts, uncles, and cousins. Cremation has been requested. Visitation will be held on Tuesday, June 16, 202 from 5:00-7:00 p.m at Countryside Funeral Home.. A memorial service will be held on Wednesday June 17, 2020 at 10:30 a.m. at Westview Baptist Church (1415 S. Plummer Avenue, Chanute). Feel free to wear Chiefs apparel in honor of Ken’s love for his favorite team. In lieu of flowers, memorials are suggested to Ann’s Angels Canine Rescue or Cherry Street Youth Center and may be left with or mailed to Countryside Funeral Home. Online condolences may be left at www.countrysidefh.com. Services entrusted to: Countryside Funeral Home 101 N. Highland, Chanute, KS 66720

Kenneth Charles Boyd, age 70 of Chanute, passed away on Saturday, June 6, 2020 at his home. Ken was born on May 10, 1950 in Yates Center, KS, to James Henry and Kathryn Mae (Mulsow) Boyd. He graduated from Yates Center High School in 1968.... View Obituary & Service Information

The family of Kenneth Charles Boyd created this Life Tributes page to make it easy to share your memories.

Kenneth Charles Boyd, age 70 of Chanute, passed away on Saturday,...

Send flowers to the Boyd family.