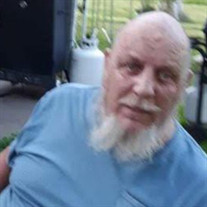 Kenneth Lee Karr, 62, of La Harpe, KS died Tuesday, October 19, 2021 at Overland Park Regional Medical Center. He was born on July 16, 1959 in Iola, KS to Ray and Betty (Hambrick) Karr. Born in Iola and raised in LaHarpe, Kenneth stayed close to home always to remain near his family. He worked a variety of jobs including as a corrections officer for Allen County for some years and for D of K Vault Company for more than a decade. On April 26, 1985, Kenneth married Patty Smith. Kenny adopted his oldest daughter Sunshine and shortly after Kenny and Patty had their youngest daughter, Jamie. He loved to fish, camp and play with his mud trucks. His family was his focus always and the best part of his life and his grandbabies just lit up his world. Kenny leaves behind his daughters, Sunshine (Patrick) Jones of La Harpe, KS and Jamie (Jon) Karns of Pittsburg, KS, a brother Harold Karr of La Harpe, KS, grandchildren Aerianna Jones, Cadence Jones, Makenzy Karns, Patick James “Pajama Bottoms” Thomas, Jr. and Samantha Thomas, many nieces and nephews and significant other Samantha Puckett. He was preceded in death by his parents, wife Patty and sisters Carol Long-Karr, Joan Zornes and Linda Parks. Cremation has taken place and a private family burial will take place at a later time. Services entrusted to Countryside Funeral Home, 101 N. Highland, Chanute, KS 66720.

The family of Kenneth Lee Karr created this Life Tributes page to make it easy to share your memories.

Send flowers to the Karr family.