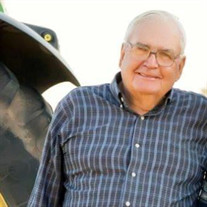 Kenneth Vincent Walker, 92, of rural Moline passed away at his home on March 13, 2022. Kenneth was born at home in rural Moline on July 14, 1929 to Joseph Raymond and Clara Catherine (Naut) Walker. He attended school at Old Boston through the eighth grade and graduated from Moline High School in 1947. Kenneth met the love of his life, Ruth Marie Moore, in 1953, and they were united in marriage at St. Mary Catholic Church in Moline on August 5, 1957. Their union was blessed with three children: Steven Vincent, Sally Ann, and Paula Jo. Kenneth grew up on, worked and raised his family on the farm originally homesteaded by his grandfather, Ignatius Benjamin (Nace) Walker, in 1871. He was happiest out on the land, in his tractor, working cattle or doing whatever needed to be done to keep the farm going. Even though his formal education ended after high school, he was a life-long learner who spent countless hours reading about the changes in farming and the cattle industry. Kenneth was a steward of the land whose goal was to leave that land even better than the way he found it. As important as the farm was to Kenneth, family was his top priority. No matter how long the days were, he was always in the house for supper around the table, never missed a ballgame, music concert, or 4-H event, and built many floats for Crazy Days parades. He spent countless hours repairing boat motors so that his family could spend Sunday afternoons at the lake where he pulled kids on skis or the inter-tube until the sun went down. And most summers, he found the time for a quick family vacation before school started again. Kenneth was a devout Catholic whose faith in God brought him through many trials in his lifetime. He was a lifelong member of St. Mary Catholic Church in Moline where he served on the parish council and was a member of the Knights of Columbus. He was a member of Moline Chamber of Commerce and the Kansas Livestock Association. Kenneth was preceded in death by his parents, Ray and Clara Walker, and his younger brother, George Leonard Walker. He will be missed in this life by his wife of 64 years, Ruth, son Steve and wife Roxane Walker, daughters Sally Ann Walker, Paula Jo and husband Shane Green; grandchildren: Amber Nicole (Green) and Matt Chapman, Garrett Walker Green, Karsten Lee Walker, Caleb Vincent Walker, and Alanna Maye Walker; great- granddaughters Leighkyn Jo and Elizabeth Kate Chapman; his older brother, Jack Walker and wife, Joyce; younger sister Mary Catherine and husband Jim Taylor, niece Katie Taylor, nephews Chris Taylor, Timm Walker and family, Jeff Walker; Mike Walker and family; all of his other Walker Cousins and countless friends. Rosary and Visitation will be held for Kenneth on Thursday, March 17, 2022 at St. Mary Catholic Church in Moline. Rosary will be held from 6:00-6:30pm with visitation from 6:30pm-8:00pm. Funeral mass will be held Friday, March 18, 2022 at 10:00 am at St. Mary Catholic Church in Moline. In lieu of flowers, memorial contributions have been suggested to St. Mary Catholic Church in Moline and can be mailed to or left with the funeral home. Online condolences can be left at www.countrysidefh.com. Services entrusted to Countryside Funeral Home, 206 E. Washington St., P.O. Box 1233, Howard, KS 67349.

Kenneth Vincent Walker, 92, of rural Moline passed away at his home on March 13, 2022. Kenneth was born at home in rural Moline on July 14, 1929 to Joseph Raymond and Clara Catherine (Naut) Walker. He attended school at Old Boston through... View Obituary & Service Information

The family of Kenneth V. Walker created this Life Tributes page to make it easy to share your memories.

Kenneth Vincent Walker, 92, of rural Moline passed away at his...

Send flowers to the Walker family.