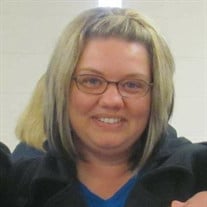 Kristy Dawn Ammons, age 40, of Chanute, KS, passed away on Monday, September 16, 2019 in Chanute, KS. She was born on October 12, 1978 in Chanute, KS the daughter of Fred and Linda (Daniels) Kuhn. Kristy graduated from Altoona Midway High School in 1997. On October 29, 2005, she married Terry Ammons in Neodesha, KS, he survives her at the home. Kristy worked as an office manager for JB’s Electric LLC and enjoyed selling her crafts at craft festivals in the area. She was very active with the Buffalo Fire Dept. in helping with fundraisers. She also organized and ran the Buffalo fireworks display every year. Kristy enjoyed crafting and spending time with her boys. She loved her family dearly and she will be greatly missed. Kristy worshipped at Blessed Hope Bible Baptist Church in Chanute was a member of the St. Peter’s Lutheran Church as a youth. Kristy is survived by her Parents: Fred and Jamie Kuhn John and Linda Baker Husband: Terry Ammons Sons: Ryder Ammons, Kason Ammons, Thomas Ammons, Tanner Ammons all of Chanute, KS Brothers: Sean Baker of Emporia, KS James Kuhn of Buffalo, KS Billy Albin of Chanute, KS Sisters: Mary Splechter of Chanute, KS Janae Isbell of Carl Junction, MO Numerous Aunts, Uncles and Cousins Family will greet friends on Friday, September 20, 2019 from 6-8 p.m. at Countryside Funeral Home Johnson Chapel in Chanute, KS. Funeral service will be on Saturday, September 21, 2019 at 10 a.m. at Blessed Hope Bible Baptist Church in Chanute, KS. Burial will follow at Buffalo Cemetery in Buffalo, KS. Online condolences may be left at: www.countrysidefh.com. The family suggests memorials to be made to American Cancer Society and may be left with or mailed to the funeral home. Arrangements have been entrusted to Countryside Funeral Home, 101 N. Highland, Chanute, KS 66720.

The family of Kristy Dawn Ammons created this Life Tributes page to make it easy to share your memories.

Send flowers to the Ammons family.