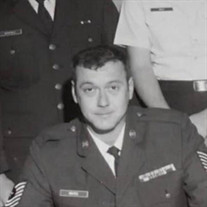 Larry Allen Coates, Sr., age 73 of Longton, KS passed away on Wednesday, June 30, 2021 at his home. Larry was born January 29, 1948 in Beatrice, NE to Lester and Milgene (Demphey) Coates. He grew up alongside 5 siblings, and graduated from Beatrice High School. After graduating, Larry worked in the oil fields for a while, then as a short order cook before enlisting in the United States Air Force. There he found his calling, and spent the next 20 years serving his country. He was stationed in many places of the world including Vietnam, Phillipines, and Turkey. Back in the states, he was stationed in California and Montana before ending up at McConnell Air Force Base in Wichita, where he stayed until he retired as an E-7 Master Sergeant. After retirement, Larry wanted to live in the country and found his place south of Longton. He had 2 hobbies that he was passionate about, working and saving animals. He tinkered with stuff in his shop, and rescued many dogs from AWOL, which he loved dearly. At one point, Larry had 50 dogs total, until his health wouldn’t let him take care of them all. Larry loved his family and friends, and will be truly missed by them all. Larry is survived by his children: Larry Coates, Jr. of Longton, KS Lalaine Reist and husband Steven of Wichita, KS Janet Ruckle of Wichita, KS Grandchildren: Whitney Ferguson, Brooke Reist, Traci Reist, Kevin Reist, Joseph Reist, Emily Reist, Jasmine Haraburda, Kendra Haraburda, Matthew Haraburda, Brendon Haraburda, and Samantha Ruckle 9 great-grandchildren Siblings: Patsy, Nancy, Brenda He was preceded in death by his parents, sister Betty, and brother Jerry Per Larry’s request, cremation has been requested with no services planned Memorial contributions in Larry’s name can be made to AWOL Humane Society and can be mailed to or left with the funeral home. Services entrusted to Countryside Funeral Home, 206 E. Washington, PO Box 1233, Howard, KS 67349

Larry Allen Coates, Sr., age 73 of Longton, KS passed away on Wednesday, June 30, 2021 at his home. Larry was born January 29, 1948 in Beatrice, NE to Lester and Milgene (Demphey) Coates. He grew up alongside 5 siblings, and graduated from... View Obituary & Service Information

The family of Larry Allen Coates Sr. created this Life Tributes page to make it easy to share your memories.

Send flowers to the Coates family.