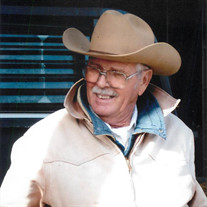 Larry Rodger Odle, 82, of Howard, KS passed away Monday, February 14, 2022 in Kansas City, MO. He was born on June 16, 1939 in Cedar Point, Kansas, the son of Vernon and Dorothy (Merritt) Odle. Growing up, Larry enjoyed hunting and fishing. He graduated from Center Point High School and shortly after, he met Margaret McMinn through mutual friends on her family’s farm near Wichita. Although, they knew right away, they waited until Margaret graduated from high school and on June 2, 1962, they were united in marriage; a union that would last almost 60 years and produce three sons. Larry worked for 10+ years doing plumbing and construction work for Leffler and later for Don Vaughn, Inc. In 1980, however, Margaret and Larry decided it was time to take their boys and achieve their dream of living right in the middle of their piece of land. They chose a place right outside of Howard, KS to house their farm. Larry put in 42 years of solid work, raising angus cattle and building a new home on their land after the original farm house just didn’t quite fit their needs anymore. Larry always was a hard worker, a loving husband and father. He will be greatly missed and never forgotten. Larry leaves behind his wife Margaret of the home Sons Ty Odle of Howard, KS Vince Odle of Eureka, KS Grandchildren Eric, Ethan, Andrew, Chris, James and Kevin Preceding Larry in death are: His parents Vernon and Dorothy Sister Valeta Allison Brother James Odle And a son, Clint Odle Funeral services will be held at Countryside Funeral Home in Howard, KS on Saturday, February 26, 2022 at 1:00pm with interment immediately following at Cresco Cemetery on Hwy 99. Online condolences can be left at www.countrysidefh.com. Services entrusted to Countryside Funeral Home 206 E. Washington St., P.O. Box 1233 Howard, KS 67349.

The family of Larry Rodger Odle created this Life Tributes page to make it easy to share your memories.

Send flowers to the Odle family.