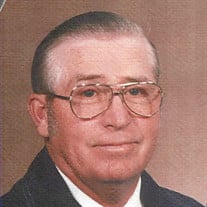 Larry Lee Sele, age 87 of Toronto, KS, passed away Friday, November 13, 2020 at Neosho Memorial Hospital in Chanute, KS. Larry was born June 12, 1933 in Climax, KS to Marius and Hazel (Boss) Sele. On August 3, 1956, he married Donna Adkins They enjoyed 64+ years together, raising 2 sons Randy and Rick. Larry worked numerous jobs throughout his life. He worked on a ranch west of Fall River, and after he and Donna were married, they bought and ran a gas station in Batesville, KS. After closing the store, they moved to Toronto, KS. Over the years, he drove a school bus, ran an auto repair shop, worked as a special deputy for the Woodson County Sheriff’s office, was the City Marshal for Toronto, and then became self-employed and owned and operated his own excavation company. Larry was proud of being part of building the Toronto Lake Dam back in the 1950’s, when he drove a dumpster while the dam was being built. Larry is survived by his wife Donna of the home Sons: Randy Sele and wife Hazel of Toronto, KS Rick Sele and wife Cindy of Fredonia, KS Grandsons: Richard Sele Jr and wife Kristin of Citrus Heights, CA Christopher Sele of Maize, KS Great-grandchildren--Brooklyn and Joseph. He was preceded in death by his parents, half-brother Maurice Sele, infant twin sisters, and grandchild Jaime Sele. Cremation has been requested, and due to COVID considerations, the family will hold a graveside service at a later date. Memorial contributions in Larry’s name can be made to the Fredonia Pound Pals and can be mailed to or left with the funeral home. Services entrusted to: Countryside Funeral Home, 420 S. 20th, PO Box 247, Fredonia, KS 66736

The family of Larry Lee Sele created this Life Tributes page to make it easy to share your memories.

Send flowers to the Sele family.