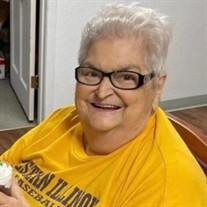 Laurice Jean Madill, 82, of Chanute passed away on Wednesday, February 2, 2022. Laurice was born on May 4, 1939, in Iola, Kansas, the daughter of Paul and Jean (Foster) Life. Laurice grew up in the Topeka area where her father was a pastor, at the age of 12 her family moved to Chanute and she graduated from Chanute High School in 1957. At Chanute High School was where she met the love of her life Norman Madill and they were married on September 2, 1955. They were married for 49 years until Norman’s passing on August 30, 2005. Laurice had many hobbies and interests in life; she absolutely loved to sew and crochet, make Easter dresses for her granddaughters, and to read. She was very active in her church, loved her cats, especially her cat Bootsy, attending her sons and grandsons sporting events, watching the Kansas City Chiefs and the Kansas City Royals. Laurice was a member of the Otterbein United Methodist Church for most of her life, as her father was the first pastor of the church, she was also a member of the VFW Auxiliary and President of United Methodist Women. Laurice is survived by: Two Sons: Marshall Madill and his wife Jan of Overbrook, KS Craig Madill and his wife Anita of Houston, TX Daughter: Nita Cummings and her husband Bob of Chanute, KS Brother: Dean Life of Lexington, KY Sister: Donna Gillmore and her husband Chris of Emporia, KS Fourteen Grandchildren Thirty-eight Great-Grandchildren Eight Great-Great Grandchildren Laurice was preceded in death by her parents, husband Norman, daughter Norma Rae Madill, and granddaughter Sara Dobbins. Visitation will be held on Sunday, February 6, 2022 from 2:00 pm to 4:00 pm at the funeral home. Funeral service will be held on Monday, February 7, 2022 at 10:30 am at Otterbein United Methodist Church in Chanute with burial to follow at Neosho County Memorial Park Cemetery west of Chanute. Memorials have been suggested to Otterbein United Methodist Church or Castaways Animal Shelter and Sanctuary and may be left with or mailed to the funeral home. Online condolences may be left at: www.countrysidefh.com. Services entrusted to Countryside Funeral Home 101 N. Highland, Chanute, KS 66720.

Laurice Jean Madill, 82, of Chanute passed away on Wednesday, February 2, 2022. Laurice was born on May 4, 1939, in Iola, Kansas, the daughter of Paul and Jean (Foster) Life. Laurice grew up in the Topeka area where her father was a pastor,... View Obituary & Service Information

The family of Laurice Jean Madill created this Life Tributes page to make it easy to share your memories.

Laurice Jean Madill, 82, of Chanute passed away on Wednesday,...

Send flowers to the Madill family.