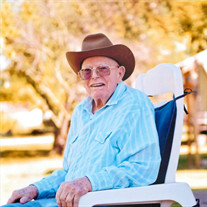 Lawrence Leon Malone, age 99, a resident of Moline, KS, passed away Wednesday, December 15, 2021 at Sedan City Hospital in Sedan, Kansas. He was born on September 26, 1922 to Herbert and Eva (Witt) Malone in rural Chautauqua County, Kansas. He graduated from Moline High School in 1941 and shortly after married his wife Eva (McGregor) on November 22, 1942. They shared nearly 72 years of marriage until her death in 2014. Lawrence and Eva made their home on their farm in Belknap, KS and worked the farm together and raised their three children: Alton, Corrine and Leroy until they built their home in Moline in 1985. They proudly housed Polled Hereford cattle and built about 11 miles of terraces and a mile of waterways in total on their property. Over his lifetime, Lawrence was very active in his community, serving on the school board, Farm Bureau, Chautauqua County Land Conservation and Polled Hereford Association. In 2017 he was honored with receiving the Chautauqua County Pioneer Award. He and Eva were avid square dancers for close to 14 years and he so enjoyed playing cards with family, accumulating around 30 decks of cards at the last count. As devoted to his community, family and farm as he was, his greatest accomplishment was his lifelong marriage to Eva. Lawrence is survived by his children Alton (Marie) Malone of Emporia, Corrine Wood of Fort Worth, Texas, Leroy (Wanda Mills) Malone of Moline, 9 grandchildren and 24 great-grandchildren. He was preceded in death by his parents, a brother Marvin Malone, a sister Leona and his wife Eva. In lieu of flowers, memorials have been suggested to the Moline Alumni Association. Visitation will be held Sunday, December 19, 2021 at Countryside Funeral Home in Howard, KS from 5-7pm. Funeral services for Mr. Malone will be held Monday, December 20, 2021 at Countryside Funeral Home in Howard at 10:00 am with interment to immediately follow at Belknap Cemetery. Services entrusted to Countryside Funeral Home, 206 E. Washington St., PO Box 1233, Howard, KS 67349.

The family of Lawrence Leon Malone created this Life Tributes page to make it easy to share your memories.

Send flowers to the Malone family.