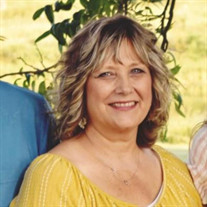 In the early morning hours of Monday, March 28, 2022, Lisa Lynette (Lewis) Harrod WON her hard fought battle with cancer by receiving the greatest gift of eternal life. Surrounded by her beloved family, Lisa never lost her will to fight and most importantly she NEVER lost her faith. Lisa was born July 27, 1967 to parents Harry and Luan (Squier) Lewis in Wichita, Kansas. She grew up in the Beaumont/Latham Kansas area and graduated from Bluestem High School with the class of 1985. Following graduation, Lisa married Gary Harrod on October 18, 1985 and they lived in El Dorado, Kansas. During this time Lisa and Gary became parents of a son, Nicholas who died in infancy. Moving to Howard in 1986, Lisa operated a day care before becoming an employee of the West Elk USD 282 school system in the 1988-89 school year. She was employed as an assistant secretary at the high school facility under then head secretary, Marvis Gaddie before later becoming Head High School Secretary. Lisa was employed by West Elk USD 282 for 34 years until her health dictated otherwise. During this time, she served in many capacities---cheerlead sponsor and Senior Class Sponsor, just to name a few. During this time at West Elk, Lisa and husband Gary were blessed with the birth of two daughters, Kayla in 1991 and Ashley in 1995 and Lisa’s world totally revolved around her daughters, her husband and her family. Lisa always had a knack for creativity, having been in 4-H when she was younger and doing various crafts with her mom, Luan. Lisa became very passionate about quilting during her battle with cancer, a passion which culminated with the onset of the pandemic. She quilted a total of 8 quilts in the year 2020 and went through one machine. In the last 5 years, she has quilted 20 plus quilts, including at least one for each grandchild. She also was able to paint and create with her daughter, Kayla, several board designs and together they started Fearfully and Wonderfully Made Creations and had paint classes for others. Lisa and Gary were blessed with 3 grandchildren, Jaxon, Carly, and Reese, who added to the family’s extreme happiness – all of whom Lisa spoiled lavishly. Lisa’s love, talents and skills, and her spirit are all testimony to her larger than life faith. She put her trust in God and helped instill that same faith in her family. She and her family attend Severy United Methodist Church where she also shared her love for God and His children. Lisa is survived by her husband Gary, of the home. Daughters Kayla (Alex), Ashley (Wyatt); Grandchildren: Jaxon, Carly and Reese, Parents: Harry Lewis (Lenea), Luan McCubbin and brother Jared Lewis. Brother-in-law Greg Harrod, Mother and Father in law Mary and Jerry Harrod. Nephews: Aidan, Donovan and Keegan Harrod and numerous cousins and dearly loved friends. Preceding Lisa are her son, Nicholas, Stepfather Noel McCubbin and grandparents Bill and Pat Squier and Harry and Nettie Lewis. The family will receive friends at the Visitation held from 6:00-8:00 pm at Countryside Funeral Home in Howard on Thursday, March 31, 2022. Funeral Service will be held at 10:00 AM on Friday, April 1, 2022 at the Severy United Methodist Church in Severy, Kansas In lieu of flowers, the family has suggested memorial contributions may be made in Lisa’s name to the Severy United Methodist Church or Harry Hynes Hospice—Coffeyville Chapter and may mailed to or left with the funeral home. Online condolences can be left at www.countrysidefh.com. Services entrusted to Countryside Funeral Home, 206 E. Washington, PO Box 1233, Howard, KS 67349.

In the early morning hours of Monday, March 28, 2022, Lisa Lynette (Lewis) Harrod WON her hard fought battle with cancer by receiving the greatest gift of eternal life. Surrounded by her beloved family, Lisa never lost her will to fight and... View Obituary & Service Information

The family of Lisa Lynette Harrod created this Life Tributes page to make it easy to share your memories.

Send flowers to the Harrod family.