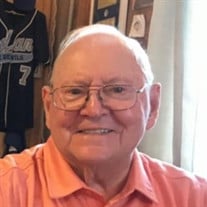 Lon R. Cummings 86 of Moline, KS passed away on Tuesday, November 24, 2020 after a short illness. He joined his wife of 66 years Catherine Cummings in heaven who passed away March 20, 2020. Lon was born October 30, 1934 in Winfield Kansas to Paul and Mary Cummings. He was raised by his grandfather on the family farm in Moline Kansas and is preceded in death by his three brothers: Larry, Bob, and Jerry. Lon left home at the age of 17 in March of 1952 and joined the U.S. Air Force vowing to return to Moline someday and raise cattle. While on temporary duty near Kansas City in December of 1953, Lon met his lifelong love. It has been told that Lon and a buddy were cruising the streets of Kansas City and happened to notice Catherine on the street corner waiting for a bus. Lon kicked his buddy out of the car, turned around and the rest is history. Lon and Catherine were married on February 28, 1954 in a small ceremony in Kansas City, Kansas and had two sons, Richard J. Cummings and Patrick B. Cummings. Lon proudly served in the Air Force for more than 22 years in which duties in North Africa, Korea, and Vietnam separated him from his family. The bond between Lon and Cathy grew stronger during these times of separation. Many of his duty assignments provided a chance for Lon and Cathy to travel to many different places including Tennessee, Germany, California, and at last stationed in Alaska. While in Alaska, Lon not only enjoyed hunting and fishing with his sons, but acquired his commercial pilots license, bought a plane, and flew every chance he could. Flying provided Lon the opportunity to thoroughly enjoy the majestic scenery that Alaska had to offer. It was not uncommon for him to fly out on a Saturday morning to a remote lake and stop in at the local lodge for breakfast and coffee. Not wanting to be separated from the family, Lon retired from the Air Force on August 1, 1974 and remained in Alaska until 1978. While in Alaska, Lon purchased the family farm in Moline from his great uncle. Slowly working his way back to Moline, Lon and Cathy moved to Stillwater Oklahoma where Lon became utilities superintendent at Oklahoma State University. Lon and Cathy loved the college atmosphere and became die hard OSU Cowboy football fans. They not only attended all home games but travelled to Bowl games as well. When football season was over, they joined a square dance club and traveled to dances throughout Oklahoma and Texas. Lon and Cathy began making weekend trips to their cabin at the old Moline City Lake to enjoy the peace and quiet atmosphere that the lake had to offer. Finally, in July of 1994, Lon retired from OSU and moved back to Moline, Kansas to fulfill his lifelong dream. Lon and Cathy bought a home and additional farmland just outside of Moline where they raised cattle for many years. Lon became very involved in the community and served as Chairman of the Elders at Moline Christian Church, member of the Moline Cemetery Board, 56-year member of the Masonic Fraternity, member of the Eastern Star, and past Commander and member of the VFW. Lon was also an active member of the Coalition of Retired Military Veterans that took the fight for lifetime medical benefits for all retired veterans to the Supreme Court and won. Lon touched many people’s lives and always saw the good in them. He was known as a caring and giving person that would truly give you the “shirt off his back”. He was also an accomplished man, loving husband, father, and grandfather. He will be truly missed by all who knew his spirit and kindness. Lon is survived his sons Richard J Cummings of Moline KS and Patrick (Cindy) Cummings of Rolling Prairie, IN. He is also survived by his grandchildren Joshua (Rachel) Cummings of Crown Point, IN, Tonya (Lee) Cummings Hansen of Monticello, IL, Nicholas Cummings (US Air Force) stationed in Oklahoma City, OK, Caitlin Cummings of Atlanta, GA, and Meghan Cummings of Ballston Spa, NY. His great grandchildren are Noah Cummings of Crown Point, IN, Beau and Sloan Hanen of Monticello, IL. There will be a memorial service for both Lon and Catherine on Saturday, April 17, 2021 at 11:00 am at the Moline Christian Church. Inurnment will follow in Moline City Cemetery. In lieu of flowers or gifts, donations can be made to Moline Christian Church, and can be mailed to or left at the Funeral Home. Memorial Services are entrusted to Countryside Funeral Home, 206 E. Washington, PO Box 1233, Howard, KS 67349

Lon R. Cummings 86 of Moline, KS passed away on Tuesday, November 24, 2020 after a short illness. He joined his wife of 66 years Catherine Cummings in heaven who passed away March 20, 2020. Lon was born October 30, 1934 in Winfield Kansas... View Obituary & Service Information

The family of Lon Richard Cummings created this Life Tributes page to make it easy to share your memories.

Send flowers to the Cummings family.