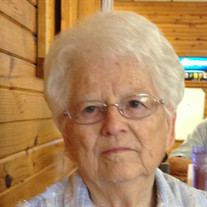 Louise (Hoover) Kelsey, age 91 of Fredonia, KS passed away September 3, 2020 at Fredonia Regional Hospital in Fredonia. Louise was born June 18, 1929 in Fredonia, KS to Louis and Vesta (Whiteside) Hoover. She was raised in Fredonia and graduated Fredonia High School, class of 1947. In 1949, she married Ray Kelsey in Eureka, KS. She joined him in running the meat packing plant in Fredonia that Ray had bought in 1945. Together, they ran that plant 6 days per week from 7 am until 6 pm. They didn’t have much time for anything else, but somehow found time to be active in the Wilson County Fair Association, and raise 2 girls, Betty and Carol. They were married 31 years until Ray passed away in March 1980. Louise was an active lady, being a member of the First Christian Church in Fredonia, the Senior Citizen Center, American Legion Auxiliary, and helped to organize and form the Kansas Twin Association. Louise is survived by her daughters: Betty (Larry) Richardson of Eureka, KS Carol (Tom) Arnold of Fredonia, KS Grandchildren: Troy (Jennifer) Richardson of Eureka, KS Jeff (Amanda) Arnold of Littleton, CO Matt (Tara) Arnold of Fredonia, KS Great-grandchildren: McKenna Richardson of Eureka, KS Alex Arnold of Littleton, CO Jaxson Arnold of Littleton, CO Max Arnold of Littleton, CO Dan Arnold of Fredonia, KS She was preceded in death by her parents; her husband, Ray; and her twin sister, Lois. Funeral Service for Louise will be held on Tuesday, September 8, 2020 at 11:00 am at Countryside Funeral Home, Fredonia, KS Visitation will be held for 1 hour prior to service at the funeral home. Memorial contributions in Louise’s name can be made to the First Christian Church of Fredonia or the Christian Thrift Store and can be mailed to or left with the funeral home. Services entrusted to: Countryside Funeral Home, 420 S. 20th, P.O. Box 247, Fredonia, KS 66736

Louise (Hoover) Kelsey, age 91 of Fredonia, KS passed away September 3, 2020 at Fredonia Regional Hospital in Fredonia. Louise was born June 18, 1929 in Fredonia, KS to Louis and Vesta (Whiteside) Hoover. She was raised in Fredonia and graduated... View Obituary & Service Information

The family of Louise Kelsey created this Life Tributes page to make it easy to share your memories.

Send flowers to the Kelsey family.