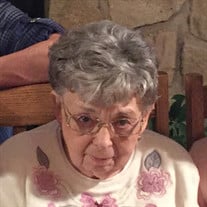 Lucy "Frances" Gillen, age 90, formerly of Fredonia, Kansas, passed away April 24, 2020 at Eagle Estates in Independence, Kansas. Frances was born April 17, 1930 in Chase, Kansas to Oscar and Luria (Root) Horine. Growing up, the family moved around a lot, eventually ending up in Fredonia. As a young woman while working in the movie theater in Fredonia, she met a young man who asked her out. She turned him down at first, but he was persistent, and on December 16, 1948 she was united in marriage to Robert Gillen. Robert and Frances raised their four daughters in Fredonia, and were married 61 years until his passing in 2010. Frances worked different jobs at several businesses throughout her life, but her career was being a homemaker and a mom. She was known by many for her China painting. She always served on the Election Board, and was a member of the China Painters, and the Democratic Women's Organization. She is survived by her daughters: Yvonne Young of Cary, NC Louise (Skip) January of Smithfield, MO Pegi (Jim) Fortner of Lincoln, NE Michele (Gary) Reutlinger of Fredonia, KS 12 Grandchildren and numerous Great-Grandchildren She was preceded in death by her parents, husband Robert, and brothers Guy Horine and Jim Horine. Cremation has been requested. Graveside service for Frances will be Wednesday, April 29, 2020 at 1:00 pm, at the Sacred Heart Cemetery, Fredonia, Kansas Memorial contributions can be made to the St. Jude's Children's Hospital and can be mailed to or left with the funeral home. Services have been entrusted to Countryside Funeral Home, 420 S. 20th, P.O. Box 247, Fredonia, Kansas 66736

The family of Lucy "Frances" Gillen created this Life Tributes page to make it easy to share your memories.

Send flowers to the Gillen family.