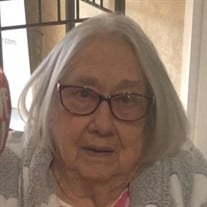 Madge V. Leatherman age 92, passed away Thursday, April 16, 2020 at Harry Hynes Hospice in Wichita. Madge was born on August 22, 1927 in Mildred, KS the daughter of George Albert and Hazel (Colgin) Payne. Madge had worked for the Chanute High School as a cook, and also at the Burlington Overall Factory. Madge enjoyed supporting her grandchildren in all of their activities. She liked camping and fishing, working in her garden and cooking great meals for her family. Madge enjoyed watching any kind of sporting events but her favorite was K-State basketball and the KC Chiefs On July 24, 1948 Madge married Bill Leatherman, they were married for 43 years until his death in 1992. Madge will be greatly missed by her family, and her annual trips to western Kansas to see her sister and family. Survivors include: Son: Jon Leatherman of Pittsburg, KS Brothers: Floyd Payne of Pittsburg, KS Harold Don Payne and wife Patsy of Colony, KS 2 Grandsons: Ryan Leatherman of Pittsburg, KS Jerad Leatherman of Pittsburg, KS Madge was preceded in death by her parents, husband Bill, 4 brothers: George, Carl, Homer and Robert Payne and 1 sister Alberta Payne A graveside service will be held on Tuesday, April 21, 2020 at 2:00 PM at Shaw Cemetery, no public visitation will be held due to Covid 19 restrictions. Memorials have been suggested to the Special Olympics of Kansas and may be left with or mailed to the funeral home. Online condolences may be left at: www.countrysidefh.com Services entrusted to Countryside Funeral Home 101 N. Highland, Chanute, KS 66720

The family of Madge V. Leatherman created this Life Tributes page to make it easy to share your memories.

Send flowers to the Leatherman family.