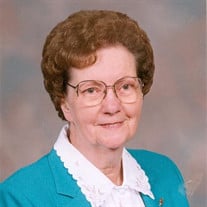 Margaret S. Powers, age 96 of Thayer, KS, passed away on October 24, 2019 at Heritage Healthcare in Chanute, KS. She was born May 26, 1923 in Hutchinson, KS, the daughter of Harvey and Merna (Kimpton) Studebaker. On August 3, 1941, she married Joe Powers in Chanute, KS. He preceded her in death in 1994. Margaret and Joe worked the farm for many years before opening Powers Grocery in Thayer. They ran the grocery store from 1960-1968. She also worked as a life insurance agent for many years and as the Thayer Senior Center Director for about 30 years. She enjoyed sewing, crocheting and most of all loved to talk. Margaret was a member of the Thayer Christian Church. Survivors include: Son: Ivan Powers of Thayer, KS Daughters: Linda Powers of Thayer, KS Lois Johnson of Chanute, KS 2 Grandchildren 1 Great Grandchild Margaret was preceded in death by her parents; husband, Joe; son Clifford Powers; daughter, Lila Powers; brothers, Carl, Kenneth and Wayne Studebaker and sisters, Dorothy Tobler, Grace Gugliotti and Mildred Powers. Cremation has been requested. The family will be holding a memorial service at the Thayer Christian Church in Thayer, KS on Friday, November 1, 2019 at 2 p.m. Online condolences may be left at: www.countrysidefh.com. The family suggests memorials to be made to Thayer Christian Church or St. Jude’s Children Research Hospital and may be left with or mailed to the funeral home. Arrangements have been entrusted to Countryside Funeral Home, 101 N. Highland, Chanute, KS 66720.

The family of Margaret S. Powers created this Life Tributes page to make it easy to share your memories.

Send flowers to the Powers family.