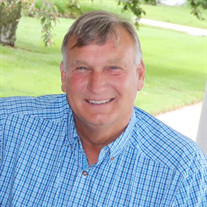 Mark Lewis Huser, 61, of Fredonia, Kansas passed away peacefully on Sunday, February 20, 2022 surrounded by his wife and children. Mark was born in Fredonia, KS on June 20, 1960 to his parents Herbert and Ethel (Roth) Huser. He was born 14 minutes before his twin sister, Myra. Mark grew up on the family farm along with his eight siblings: David (Robin), Dan (Rita), Steve (Florence), Rosanna (Jeff) Shue, Geralyn (Dave) Krause, Myra (Kevin) Smith, Roger (Ann), and Kathy (Larry) McVey. He graduated from Fredonia High School in 1978 and continued working on the family farm along with his dad and two of his brothers. On May 2, 1981 he was united in marriage to Jeryl Ann Walker. They celebrated their 40th wedding anniversary in 2021. God blessed the two of them with eight children who meant so much to him. He was so very proud of all of his kids; Father Jeremy, Andrea (Cody) Merrick, Ryan (Karla), Lindsay (Devin) Wallace, Aaron (Kelli), Clinton (Stephanie), Kyle (Kyndra), and Logan. In 1991, Mark and Jeryl established their family farm, where they taught their children to work hard. No matter how much work was to be done though, Sunday Mass and family meals at the table –no matter what time it was– were always top priority. Every night he would kneel at his bed to say his prayers. Huge family get-togethers for any reason brought him so much joy. The addition of his seventeen grandchildren made these family gatherings even more beautiful. He really was a very blessed man, and he knew it. Every day he would walk by the crucifix in the hallway and thank God for the life he had been given. We can only hope and pray to carry on a love for Christ and joy for our families like he had. Mark was a devout Catholic and tried his best to share God’s word and teachings to others. He wanted to help others and had a deep passion for the Lord. He tried to have best intentions, and even though he “didn’t mean it wrong,” he was going to share his feelings and beliefs if he thought it would help someone to grow closer to the Lord. Anyone who knew him well probably received at least one of those deep conversations where he tried to preach his beliefs of what he believed God would want. Mark was known for his infectious smile and hearty laugh. That is something we will never forget, and we will always miss. Mark is survived by his wife, children, grandchildren, siblings, father-in-law, Jerald Walker, in-laws, and many many nieces and nephews. He was preceded in death by his parents, Herb and Ethel, mother-in-law Bonnie Walker, brother-in-law Larry Antley, and nephew Camron Huser. Visitation will be held at Countryside Funeral Home in Fredonia, KS on Friday, February 25, 2022 from 4-6pm with Rosary followed at Sacred Heart Catholic Church in Fredonia at 7pm. Funeral Mass will be held at Sacred Heart Catholic Church in Fredonia, KS on Saturday, February 26, 2022 at 10:00am with interment to immediately follow at Sacred Heart Catholic Cemetery. In lieu of flowers, please remember Mark and his faithfulness in supporting Catholic education by making a contribution to the St. Katharine Drexel Catholic School Fund. Memorial funds will benefit St. Andrew Catholic School in Independence, KS and St. Patrick’s Catholic School in Chanute, KS. Gifts can be sent to Catholic Diocese of Wichita, Mark Huser Memorial, 424 N. Broadway, Wichita, KS 67202. -Sacred Heart Catholic Church -Fredonia Annual Community Christmas Pageant Online condolences can be left at www.countrysidefh.com. Services entrusted to Countryside Funeral Home, 420 S. 20th St., P.O. Box 247, Fredonia, KS 66736.

Mark Lewis Huser, 61, of Fredonia, Kansas passed away peacefully on Sunday, February 20, 2022 surrounded by his wife and children. Mark was born in Fredonia, KS on June 20, 1960 to his parents Herbert and Ethel (Roth) Huser. He was born 14... View Obituary & Service Information

The family of Mark L. Huser created this Life Tributes page to make it easy to share your memories.