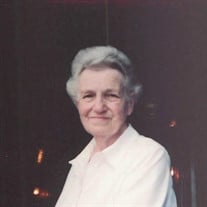 Martha Ellen (Hull) Johnson, age 94 of Independence, KS passed away June 23, 2020 at Medicalodges in Independence, KS Martha was born August 13, 1925 in Rogers, AR to Perry Allen and Rose (Knight) Hull, and was raised alongside 2 brothers, Dean and Jim. On March 22, 1942, Martha married Harold M. Johnson in Sedan, KS. Together they raised 2 sons and 3 daughters, and were married 62 years until his passing in June 2004. They raised their family in Independence, KS. She worked several jobs over the years, from working at the local Bakery, the Laundromat, the nursing home, to ACC Automotive Control for several years, but her career was raising her children, and then her grandchildren, then the great-grandchildren. She and Harold were members of the Bible Holiness Church in Independence for many years. She loved her family greatly, and they will miss her dearly. Martha is survived by: Son Kevin Johnson and wife Zella of Independence, KS Daughters Marsha Rhodes and husband David of Cherryvale, KS Shirley Jean Darbro and husband Wesley of Ringgold, GA Jan Robinson and husband Rudy of Fredonia, KS 15 Grandchildren 23 Great-Grandchildren 11 Great-Great-Grandchildren 1 Great-Great-Great-Grandchild She was preceded in death by her parents, husband Harold, brothers Dean and Jim, infant brother Melvin, and son Dr. Gary Johnson Funeral service for Martha will be held on Friday, June 26, 2020 at 11:00 AM at Countryside Funeral Home, 420 S. 20th, PO Box 247, Fredonia, KS 66736 Interment will follow at Mt. Hope Cemetery in Independence, KS Memorials in Martha’s name can be made to the Sojourn Women – Martha Esther Grant and can be mailed to or left with the funeral home. Services entrusted to: Countryside Funeral Home, 420 S. 20th, PO Box 247, Fredonia, KS 66736

The family of Martha Ellen Johnson created this Life Tributes page to make it easy to share your memories.