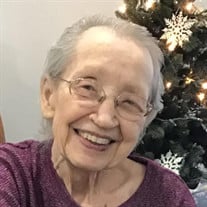 Mary Kaufman, age 91, passed away March 3, 2021 in Elk Fall, KS. Mary was born to Enos and Lydiann (Bontrager) Yoder on July 21, 1929. She was fourth of six children, raised on a farm in Yoder, KS. Mary attended and graduated from Hesston Academy where she met her husband, Glenn Kaufman. Glenn and Mary were married on February 25, 1949. After living in Idaho for a year, they moved back to Yoder, where their son, Gerald was born. In 1953, they ventured to Walker, MO and purchased a 160 acre dairy farm, with daughters Jane and Peggy added to the family. In 1960, they returned to a Kansas farm north of Newton, raising cattle, sheep, and horses. Meanwhile, their third daughter, Jeana was born. By 1982, Mary and Glenn had turned from farming to ranching, and began raising beef cattle near Howard, KS. Mary was a dedicated mother who stayed home to raise her family, and helped Glenn with farm work. She was a homemaker, wonderful cook, and preserver of foods, who enjoyed her flower and vegetable gardens. Mary had many hobbies: sewing, needlework, reading, bird watching, cooking, baking, and collecting recipes! She was a member of the Hesston Mennonite Church in Hesston, KS, and attended Calvary Chapel of Elk Falls, KS Mary and Glenn celebrated their 72nd wedding anniversary in February of 2021. They had a wonderful life together. Mary is survived by her husband, Glenn Children: Gerald (Jessie) Kaufman of Kansas City, KS Jane (Steve) Fry of Elk Falls, KS Peggy (Keith) Frye of Middlebury, IN Jeana (Ron) Schneider of Hesston, KS 6 grandchildren and 7 great-grandchildren She was preceded in death by her parents, and brother, Homer Yoder A private burial has taken place near Hesston, KS Services entrusted to: Countryside Funeral Home, 206 E. Washington, PO Box 1233, Howard, KS 67349

Mary Kaufman, age 91, passed away March 3, 2021 in Elk Fall, KS. Mary was born to Enos and Lydiann (Bontrager) Yoder on July 21, 1929. She was fourth of six children, raised on a farm in Yoder, KS. Mary attended and graduated from Hesston... View Obituary & Service Information

The family of Mary Kaufman created this Life Tributes page to make it easy to share your memories.

Send flowers to the Kaufman family.