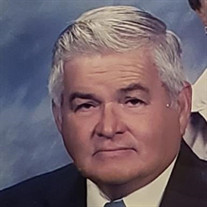 Merle J. “Butch” Sterling, age 77, of Humboldt passed away on Tuesday, November 24, 2020 at the Allen County Regional Hospital. Merle was born on July 15, 1943 in Chanute, KS the son of Alvin J. and Edna L. (Coover) Sterling, Merle was a graduate of Humboldt High School class of 1961. He was also a member of the Humboldt United Methodist Church, served on the Humboldt School Board for more than 20 years, the Allen County Fair Board, and the Young Farmer’s Association. Merle drove the school bus for many years when he was younger. He then drove a crude oil transport for more than 20 years before returning to drive a school bus until his retirement. On November 15, 1970 Merle married Julia Belle Dorris in Humboldt, and she survives at their home. They began their lives working together on their farm raising hogs, cattle and crops, but most importantly, raising their family. Including his wife Julia, Merle is survived by: 3 Children: Jarred Sterling of Ottawa, KS Layne Sterling and wife Alicia of Humboldt, KS Kendra Weatherman and husband Steven of Colony, KS Sister: Jill Beck of Sioux City, IA 8 Grandchildren: Brock and Allison Weatherman, Morgan, Mason, Mylan and Mathis Sterling and Logan and Carter Sterling. Merle was preceded in death by his parents and step father Robert R. Redfield. Funeral services will be held on Tuesday, December 1, 2020 at 10:00 am at Countryside Funeral Home in Chanute. Visitation will be held Monday, November 30, 2020 from 5-7 pm at the funeral home. Memorials have been suggested to either the HHS Alumni Association or to the Allen Co. Fair Board Association and may be left with or mailed to the funeral home. Online condolences may be left at: www.countrysidefh.com Funeral Services entrusted to: Countryside Funeral Home 101 N. Highland, Chanute, KS 66720

The family of Merle J. "Butch" Sterling created this Life Tributes page to make it easy to share your memories.

Send flowers to the Sterling family.