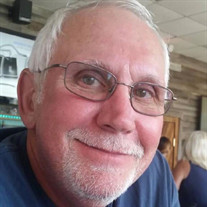 Michael D. Anderson age 70 of Chanute, passed away Tuesday April 14, 2020 at his home. Michael was born on January 16, 1950 in Beloit, Kansas the son of Clifford Franklin and Jean Marie (Studer) Anderson. Michael was a graduate of Thayer High School class of 1968. In 1969 he was drafted into the US Army and served until 1971. On September 2 1972 Michael married Regina Irene Orton and then later divorced. On December 20, 2004, Michael married Cheryl Johnson. Cheryl survives at their home. Michael worked as an engineer for a local manufacturing company for 50 years. Michael enjoyed working on cars and restoring them, and was a member of the local car club when it was active. He enjoyed arrowhead hunting, working in his yard and was a big supporter of local wildlife organizations. Most of all, Michael enjoyed spending time with his family and watching his grandchildren with their activities. Including his wife Cheryl, Michael is survived by: 5 Children: Jason Anderson and wife Melissa of Lawrence, KS Darin Anderson and wife Brenna of Chanute, KS Matthew Johnson of of Ft. Collins, CO Brandon Leach of Park City, KS Heather Neel and husband Chris of Eureka, KS Brother: Denny Anderson and wife Karen of Chanute, KS 11 Grandchildren: Harper, Hayden, Banks, Hunter, Peyton and Landen Anderson. Macin, Rylan and Paxton Johnson. Noah Neel and Clayton Leach Michael was preceded in death by his parents, and Step father Richard Clough Cremation has been requested. Due to Covid 19 restrictions, the family is planning to have a memorial service at a later date. Memorials have been suggested to the local Children’s School Lunch Program and may be left with or mailed to the funeral home. Online condolences may be left at: www.countrysidefh.com Services entrusted to: Countryside Funeral Home 101 N. Highland, Chanute, KS 66720

Michael D. Anderson age 70 of Chanute, passed away Tuesday April 14, 2020 at his home. Michael was born on January 16, 1950 in Beloit, Kansas the son of Clifford Franklin and Jean Marie (Studer) Anderson. Michael was a graduate of Thayer... View Obituary & Service Information

The family of Michael D. Anderson created this Life Tributes page to make it easy to share your memories.