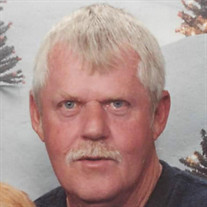 *CHANGE IN SERVICE LOCATION* Michael M. Lundy, age 73 of Independence, KS, passed away Thursday, January 14, 2021 at his home. Michael was born August 16, 1947 in Erie, KS, to Oden and Katherine (Martin) Lunday. He grew up in Wichita, KS, attending school there. In 1966, he enlisted in the United States Army, serving his country for 2 years during Vietnam. On August 1, 1981, Michael married Judy Duff in Cedar Vale, KS. They met while working together in Chanute, KS in the late 70’s, and spent the next 39 years together. Over the years, they would take weekend vacations to amusement parks, zoos, and Silver Dollar City. Michael enjoyed floating down the river in a canoe with Judy, as well as playing pinochle with friends and Judy’s parents. Michael worked several jobs through his life, including Hi Lo Tables in Chanute, the City of Grenola, and then retired from the City of Independence as the Foreman over the Water and Sewer Department. Michael is survived by his wife Judy Children: Marsha Martens of Independence, KS Matthew Miller of Independence, KS Joshua Miller of Independence, KS 2 Grandchildren, Georgia and Jack He was preceded in death by both of his parents, and infant sister, Katherine Per Michael’s request, cremation has been requested. Graveside memorial service will be held on Saturday, February 13, 2021 at 11:00 AM at Green Lawn Cemetery, Grenola, KS Memorial contributions can be made to AWOL, or the Chanute VFW Post and can be mailed to or left with the funeral home. Services entrusted to: Countryside Funeral Home, 420 S. 20th, PO Box 247, Fredonia, KS 66736

The family of Michael M. Lundy created this Life Tributes page to make it easy to share your memories.

Send flowers to the Lundy family.