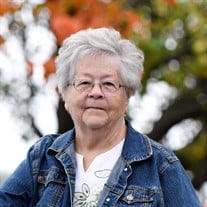 Naida F. (Eichman) Becker-Palmer, age 89 of Longton, KS, passed away November 24, 2019 at her home. Naida was born November 5, 1930 in Russell, KS to Ruben and Ella Nora (Reinhardt) Eichman. She grew up in Russell, alongside 8 brothers and sisters. She began learning about the family’s German heritage at a young age, and that was always a huge part of the household, especially the food. After graduating from Russell High School in 1948, she married Jim Becker on August 28, 1949. Together, they had 3 daughters: Diana, Deb and Barbie. Over the years, they lived in Coldwater, KS, Howard, KS, and Atkinson, NE while Jim worked as a cowboy. They ended up moving back to Howard in the early 1960’s, and their marriage ended in 1981. She later married Richard Palmer in 2000, and they were married until his passing in 2016. Naida worked at Batson’s Drug Store, ran Becker’s Daylight Donuts in Howard, KS and later went to work as Bookkeeper for the Howard Twilight Manor, retiring after several years. She then worked as substitute office help for the Longton school district until just a couple of years ago. Naida is survived by Daughters: Deb Ott and husband Brad of Fairview, OK Diana Stroble and husband Charlie of Longton, KS Barbie Small and husband Tony of Hopkins, MN Brother: Gary Eichman and wife Ida of Russell, KS 7 Grandchildren and 9 Great-Grandchildren She was preceded in death by her parents, husband Richard Palmer, grandchild Kami Ott and great-grandchildren. Visitation will be held on Tuesday, November 26, 2019, 5:00 – 7:00 pm at Countryside Funeral Home, 206 E. Washington, Howard, KS 67349 Graveside services will be held on Wednesday, November 27th at 11:00 a.m, at the Longton Cemetery in Longton, KS. Memorials are suggested to the Elk County Longton Free Fair and can be mailed to or left with the funeral home. Services entrusted to: Countryside Funeral Home, 206 E. Washington, PO Box 1233, Howard, KS 67349

Naida F. (Eichman) Becker-Palmer, age 89 of Longton, KS, passed away November 24, 2019 at her home. Naida was born November 5, 1930 in Russell, KS to Ruben and Ella Nora (Reinhardt) Eichman. She grew up in Russell, alongside 8 brothers and... View Obituary & Service Information

The family of Naida F. (Eichman) Becker-Palmer created this Life Tributes page to make it easy to share your memories.

Send flowers to the Becker-Palmer family.