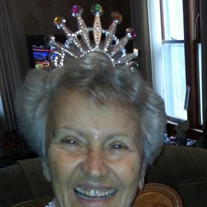 Naomi Ruth Aday, 87, of Chanute, KS passed from this life to the next on Tuesday, September 21, 2021 at the Neosho County Regional Medical Center in Chanute, KS. She was born Naomi Ruth Ellis to Hubert and Mary Clemmer-Ellis on February 5, 1934 in Oklahoma. When she was young, the family moved to Foyil, OK where she graduated Valedictorian from Foyil High School and was an outstanding basketball player, winning several state championships. It was on the basketball court that she met the love of her life, Walter Edwin Aday, The couple was united in marriage on June 17, 1952 at the 1st Baptist Church in Foyil, OK. Early in their marriage, the family moved often due to Walter’s military service and his work for Santa Fe Railroad. They made their permanent home in Chanute, KS where they raised their 3 children, daughter Retta Sue, son Walter Edwin, Jr. and daughter Patty Jean. Naomi was a long-time member of the Chanute First Baptist Church where she sang in the choir and served in many other capacities. Naomi and Walter were instrumental in starting the Cherry Street Youth Center in Chanute and volunteered their time there for many years. Naomi enjoyed many talents and was a natural born leader. She served as a Girl Scout leader, volunteered with the PTA and the Neosho County Election Board. She was also an avid sportsman. She was a bowler, enjoyed camping, boating, water skiing and fishing. Naomi enjoyed gardening and she was an excellent homemaker and cook, she even celebrated awards for her homemade salsa. Naomi was a skilled seamstress and used her sewing skills to create clothes for her children and grandchildren, to make pom-pom uniforms, wedding dresses, quilts and more. Naomi is survived by husband Walter Aday of Chanute, KS, daughter Retta and husband Steve Seger of Bartlesville, OK, son Edwin of Tulsa, OK, daughter Patty and husband Mark Davidson of Afton, OK, grandson Jared Seger and wife Crissy of Manassas, VA, grandson Jeff Seger and wife Cynthia of Norman, OK, grandson Breck Aday of Chanute, KS, grandson Brock Aday and wife Jamie of St. Paul, KS, granddaughter Tessa Barnhart and husband Brent of Tulsa, OK, and JonPaul Aday, Chicago, IL, great-grandchildren Savannah Seger, Thomas, Avery and Lilian Seger, Charlye and Ace Aday, Remington and Amelia Daniels, Bensen, Knox and Tinley Aday, Jalyn and Gemma Barnhart, and Boudey Dale Clayton, Jr. She is also survived by her brother Joe Ellis and wife Vickie of Foyil, OK, and brother-in-laws, Wilford Aday, Chanute, KS and Russell Aday, Ponca City, OK. and by many other relatives that loved her sweet spirit. Naomi was preceded in death by her grandson Boudey Dale Clayton, Sr., her parents Hubert and Mary Ellis, brother Paul Ellis, brother Earl Ellis, brother Jimmy Ellis, sister Betty Ridenour, and several other members on both sides of her family. Visitation will be held on Monday, September 27, 2021, 5 – 7 PM at the Countryside Funeral Home in Chanute, KS. Due to Covid, the family will be having a service on Tuesday, September 28, 2021 at 10:00 am and they request you join via live streaming through the 1St Baptist Church https://fbcchanute.com/. A graveside service will be held in Foyil, OK at 2:00 pm at the Ward Cemetery. Memorials have been suggested to either the Cherry Street Youth Center, or, the 1st Baptist Church of Chanute, or the Dementia Society Association. These may be dropped off at or mailed to the funeral home. Online condolences may be left at www.countrysidefh.com. Services entrusted to Countryside Funeral Home 101 N. Highland, Chanute, KS 66720

Naomi Ruth Aday, 87, of Chanute, KS passed from this life to the next on Tuesday, September 21, 2021 at the Neosho County Regional Medical Center in Chanute, KS. She was born Naomi Ruth Ellis to Hubert and Mary Clemmer-Ellis on February 5, 1934... View Obituary & Service Information

The family of Naomi Ruth Aday created this Life Tributes page to make it easy to share your memories.

Send flowers to the Aday family.