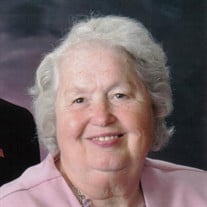 Naomi Louise Mellen departed her loving family on October 5, 2021, and peacefully entered eternal life into the arms of Jesus. Naomi was born May 20, 1932, in Fredonia, KS, to Burke and Lois (Timmons) Ramsay. She was the youngest of six. Her five brothers, Ronald, Wayne, Brice, Clayton and Dwight, preceded her in death. Naomi married the love of her life, Lyle Dee Mellen, on August 22, 1952, at Chapel 3, Fort Lewis, Washington, where Lyle was stationed in the military (Army). They shared 69 years together. To this union were 12 children which they raised with love and devotion – Bradley (Starr); Glenda (Mason) Leonard; Barry (Melissa); Brian (Debbie); Geri (Bill) Hodges; Bob (Sherys); Gennette (Randall) Robinson; Brent; Ben; Bruce (Krista); Bart; and Brandon (Michelle). While being a full-time homemaker, Naomi pursued a degree in nursing and worked briefly for Wesley Medical Center in Wichita before settling in Fredonia to raise their children. Naomi was very honored and proud of her 35 years as organist for Sacred Heart Catholic Church. She was also active in the Altar Society. Naomi was a long-time member of Busy Bee Club and Merino Rainbow WEC Unit where she held many offices. She was a leader in the Sunflower 4-H Club for several years, volunteered many years of service to the voting process as the Precinct Committee woman, and a long-time member of the Lady’s Auxiliary Society. Naomi was an avid reader and a regular at the Fredonia Public Library. Besides her love of reading, she never missed an episode of Jeopardy, Judge Judy, Monk, or Murder She Wrote. Crossword puzzles were one of her favorite pastimes. She loved to embroider and sew, making many of her kids’ clothes. She was very proud of her multiple Grand Champion ribbons on her handiwork. A sporting fanatic, Naomi followed all of her kids and grandkids sporting activities. She enjoyed watching NFL, with the KC Chiefs being her team. Her college basketball favorite was KU although she supported K-State and WSU as well. Naomi is survived by her husband, children, 25 grandchildren, and 48 great grandchildren. She was preceded in death by her parents; siblings; sons-in-law Mason Leonard and Bill Hodges; and grandson-in-law Travis Alexander. Also preceding her in death were her two sisters-in-law, Virginia Steele and Chrystal McAdam. Visitation will be on Sunday from 5 to 7 p.m. at Sacred Heart Catholic Church, Fredonia with the rosary immediately following. Services will be held Monday, October 11, at 10 a.m. at Sacred Heart Catholic Church, Fredonia. Internment will be in Fredonia City Cemetery. In lieu of flowers, memorial donations may be made to Countryside Funeral Home. Services entrusted to Countryside Funeral Home, 420 S. 20th, PO Box 247, Fredonia, KS 66736

Naomi Louise Mellen departed her loving family on October 5, 2021, and peacefully entered eternal life into the arms of Jesus. Naomi was born May 20, 1932, in Fredonia, KS, to Burke and Lois (Timmons) Ramsay. She was the youngest of six.... View Obituary & Service Information

The family of Naomi Louise Mellen created this Life Tributes page to make it easy to share your memories.

Send flowers to the Mellen family.