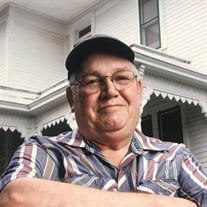 Neighl Robertson, a life-long resident of Howard, Kansas passed away unexpectedly on November 29, 2020 at the age of 76 at the Good Samaritan Society Nursing Home in Ellsworth, Kansas. Neighl was born on January 9, 1944 to Clifford and Betty Robertson in Eureka, Kansas. He grew up in Howard, Kansas and at the age of 21, he enlisted in the United States Army. There, he served two years in Korea as a cook for the Officers. Following his honorable discharge, he continued his service in the United States Army Reserve until his discharge on April 30, 1970. He was employed with Cessna Aircraft in Wichita, Kansas as a welder, and retired after 40 years of employment. Neighl was a member of the American Legion Carter-Rader #0149 post in Howard, Kansas and the National Rifle Association. He was collector of many things, but his true passion was guns and tinkering on Ford vehicles. He also enjoyed spending time with his grandkids, hunting, fishing, watching movies, putting together puzzles, and watching a variety of sports on tv. Neighl is survived by two daughters: Stephanie Shockey and husband Jason Stacie Davis and husband Warren Brother, Melvin Robertson Sister, Ann Mize and husband Lyle 4 grandchildren, Charles Orand, Ethan Robertson, Dawson Davis, Hadleigh Davis 1 great-grandchild, Mila Robertson He was preceded in death by his parents, Clifford and Betty Robertson, and Wayne and Neva Davis. Visitation for Neighl will be held from 5:00 to 7:00 pm on Thursday, December 3, 2020 at Countryside Funeral Home, Howard, Kansas The family will hold a private Memorial Service at 1:00 pm on Friday, December 4, 2020 at Countryside Funeral Home, Howard Kansas Interment will follow at approximately 2:00 pm at Grace Lawn Cemetery, Howard, KS. The family asks that if you show up at graveside, please wear a mask and follow social distancing recommendations. Memorial contributions can be made to the American Legion Carter-Rader #0149, and can be mailed to or left with the funeral home. Services entrusted to: Countryside Funeral Home, 206 E. Washington, PO Box 1233, Howard, KS 6734

Neighl Robertson, a life-long resident of Howard, Kansas passed away unexpectedly on November 29, 2020 at the age of 76 at the Good Samaritan Society Nursing Home in Ellsworth, Kansas. Neighl was born on January 9, 1944 to Clifford and Betty... View Obituary & Service Information

The family of Neighl Robertson created this Life Tributes page to make it easy to share your memories.

Send flowers to the Robertson family.