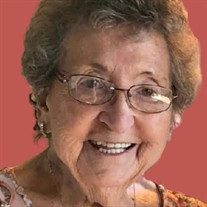 Nelva Drummond was born on RR#3 in Chanute, Kansas on December 23, 1925 and passed away peacefully on March 20, 2022, at Country Place Senior Living. She was the daughter of Lee (Opal Hizey) Ward. Nelva graduated from Galesburg, Kansas High School in 1943. She married John Drummond on February 23, 1945 at Iola, KS. He was deceased on August 13, 2010 after sixty-five and a half years of marriage. Nelva was a longtime member of the Presbyterian Church. She was treasurer of the Presbyterian Women's Circle for nineteen years. She also baked communion bread for her church for twenty five years. She was a fifty year member of the American Legion Auxiliary and the VFW Auxiliary. She was a former member of the Red Hatters. Nelva worked as Unit Stock Control at Montgomery Wards for twenty years. She later had a daycare for ten years. She was a Red Cross Bloodmobile volunteer for forty years. Nelva's favorite pastime was piecing quilts and crocheting potholders for her family and friends. She was an avid sports lover. She loved KU Jayhawks basketball and the Kansas City Royals. At the age of 88, she attended her first World Series game and at the age of 92 she got to attend a Big 12 Basketball Tournament. Survivors include Daughter Patricia Ann (Leon) Briley of Paola, Kansas, Son Steven Lee (Melody) of Peculiar, MO, and like a second daughter, Tish (Cecil) Matlock. Five grandchildren, Angie (Steve) Zahn, Bart (Meaghen) Briley, Carrie (Brian) Casserilla, Derek (Maegan) Drummond, and Cory Drummond. Fourteen great grandchildren: Shelby, Allie, Noah, Gracely, Luke, Briley, Brenna, Xavier, Aubrey, Dawson, Phoebe, Ezra, Lydia, and Nolan, and a great-great granddaughter, Ada, and sister-in-law Darlene Ward of Wichita, KS. Preceding her in death: Husband John, Daughter Deidri Marie, great grandson Eli Cooper Briley, her parents, Lee and Opal Ward, Brothers: Fred Bolinger, Wayne Ward, and Ernest Ward, and Sisters: Ruby Rogers and Beulah Barker, Sisters in Law Maxine Bolinger and Juanita Ward. Visitation will be held on Friday, March 25, 2022 at 10:00 AM at the First Presbyterian Church in Chanute. Funeral Service will be held on Friday, March 25, 2022 at 11:00 AM at the First Presbyterian Church with burial to follow at Memorial Park Cemetery in Chanute. Memorial contributions have been suggested to the First Presbyterian Church, American Legion Honor Guard, or the KU Basketball Supporters and may be left with or mailed to the funeral home. Online condolences may be left at: www.countrysidefh.com. Services entrusted to Countryside Funeral Home 101 N. Highland, Chanute, KS 66720.

Nelva Drummond was born on RR#3 in Chanute, Kansas on December 23, 1925 and passed away peacefully on March 20, 2022, at Country Place Senior Living. She was the daughter of Lee (Opal Hizey) Ward. Nelva graduated from Galesburg, Kansas High... View Obituary & Service Information

The family of Nelva Marie Drummond created this Life Tributes page to make it easy to share your memories.

Nelva Drummond was born on RR#3 in Chanute, Kansas on December...

Send flowers to the Drummond family.