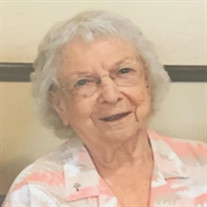 DUE TO WEATHER, THIS SERVICES HAS BEEN POSTPONED. AS SOON AS A NEW DATE IS AVAILABLE WE WILL POST IT FOR YOU. Nila Nadine Garcia, 89, passed away Thursday, February 11, 2021 at Country Place Senior Living in Chanute. Nadine was born on July 7, 1931 in Humboldt, Kansas to parents Holland "Cap" Lowry and Minnie Fern Palmer. She graduated from Humboldt High School where she was a cheerleader. Nadine was united in marriage to Raul Garcia on July 8, 1949 in Oklahoma. They lived in Chanute their entire life raising two children with love and support. They were married for over 50 years until Raul's death on June 29, 2002. Nadine was a homemaker. A member of First United Methodist Church, Nadine made many friends and enjoyed church fellowship. Nadine and Raul's grandchildren brought much joy to their lives and they attended all of their school activities and sporting events. Great grandchildren were a big part of Nadine's life, attending their birthday parties and showing pictures of them to her friends. Nadine's love for her nephew Rick and his family was apparent. Growing up and in adulthood Nadine spent as much time as she could with her beloved cousin Merriam Lowry Crowl. Nadine was a woman of faith, bible quotes could be found all around her house. Nadine is survived by: Daughter: Mary Ann Gates and husband Dan of Lawrence, KS Grandchildren: Melissa Anderson and husband Jason, Cara Gates, Derek Gates and wife Katie, all of Lawrence. Great Grandchildren: Harper, Hayden and Banks Anderson and Allie, Dani and Perrie Gates, all of Lawrence, KS. Sister: Marian Mayhugh, Chico, CA, Nephews: Rick Lowry and wife Sharrie, Rodney Lowry, Darrin Lowry and wife Trudy. Niece: Lorita Lowry Nadine was preceded in death by her parents, her brother Roy April 15, 1978, husband Raul, son Gary on April 19, 2002 and nephew Kerry Lowry. Cremation has been requested, Graveside services will be held on Saturday, March 6, 2021 at 11:00 am at Mt. Hope Cemetery in Humboldt. Memorials have been suggested to either: KICS Youth Group at First United Methodist Church, Chanute or Down Syndrome Guild of Greater Kansas City in honor of granddaughter Harper Anderson, and may be left with or mailed to the funeral home. Online condolences may be left at: www.countrysidefh.com. Services entrusted to: Countryside Funeral Home 101 N. Highland, Chanute, KS 66720

DUE TO WEATHER, THIS SERVICES HAS BEEN POSTPONED. AS SOON AS A NEW DATE IS AVAILABLE WE WILL POST IT FOR YOU. Nila Nadine Garcia, 89, passed away Thursday, February 11, 2021 at Country Place Senior Living in Chanute. Nadine was born on July... View Obituary & Service Information

The family of Nila (Nadine) Garcia created this Life Tributes page to make it easy to share your memories.

DUE TO WEATHER, THIS SERVICES HAS BEEN POSTPONED. AS SOON AS...

Send flowers to the Garcia family.