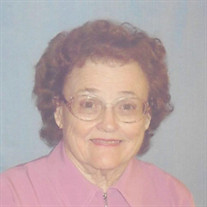 Norma Jean Salisbury, age 91 of Howard, KS, passed away September 12, 2020 at Greenwood County Hospital in Eureka, KS. Norma was born August 9, 1929 in rural Elk County to Otis and Hazel (Greenwood) Preston. She grew up alongside 8 siblings and attended Howard schools, graduating from Howard High School in 1947. On March 24, 1949, Norma married Wayne Salisbury in Howard, KS and they were married 62 years until his passing in February 2010. Norma was a farm wife, but also worked at the Elk County Courthouse and then First National Bank in Howard. She was a member of the First Baptist Church in Howard for many years. Norma is survived by her brothers: Frederick (Dorothy) Preston of Howard, KS Dennis Preston (Sharon Cowden) of Wichita, KS Sisters: Dorothy Walta of Bonner Springs, KS Ruth Preston of Newton, KS Sue (Marty) Wacker of Lansing, KS Numerous nieces and nephews. She was preceded in death by her parents; brothers, Dean Preston, Orvan Preston; sister, Joyce Lord. Funeral service for Norma will be held on Wednesday, September 16, 2020 at 1:00pm at Countryside Funeral Home, Howard, KS Memorial contributions can be made in Norma’s name to the First Baptist Church in Howard, and can be mailed to or left with the funeral home. Services entrusted to: Countryside Funeral Home, 206 E. Washington, PO Box 1233, Howard, KS 67349

The family of Norma Jean Salisbury created this Life Tributes page to make it easy to share your memories.

Send flowers to the Salisbury family.