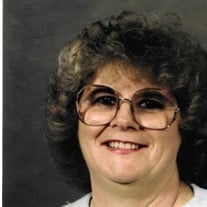 Patricia Dorothy Briley, 87, of Chanute passed away on Tuesday, October 12, 2021. Patricia was born on September 6, 1934 in Chicago, IL, the daughter of Alfred and Dorothy (Osterling) Boardman. Patricia grew up in Chicago and graduated from high school. Patricia worked many jobs throughout her life, but what she is best known for is running a daycare, along with raising her children and many of her grandchildren. Patricia was a very hard-nosed woman that loved everyone, even though she loved in a different way, Patricia sacrificed everything for her family. Patricia also opened up her home to anyone who was in need of a place to stay or just a warm meal. Patricia was a former member of the VFW Auxiliary and Faith Bible Church in Chanute. Patricia married Bill Decoster in 1952 and they later divorced, as well as Floyd Davis in 1962 and they later divorced. In August of 1966, Patricia married Donald Eugene Briley, they were married for 43 years until his passing on July 16, 2010. When Patricia wasn’t busy raising children, she loved watching the Kansas City Chiefs and Professional Wrestling. Patricia is survived by: Three Sons: Tom DeCoster of Wichita, KS Dale DeCoster and wife Suzy of Chanute, KS Bob DeCoster of Chanute, KS Three Daughters: Kathy Matlock of Coffeyville, KS Yvonne Cummings and husband Kenny of Chanute, KS Pamela Briley of Lansing, KS Seven Granddaughters: Krystal DeCoster Angela DeCoster Heather Large Tammy Snyder Amanda Cummings Jessica Shields Sierra Shields Seven Grandsons: Shawn DeCoster Steven DeCoster Robert James DeCoster Jr. Joey DeCoster Robert D. Matlock Ben Cummings Brian Christopher Shields Twenty-nine Great Grandchildren Four Great Great Grandchildren Patricia was preceded in death by her parents, husband Donald Eugene, step-daughter Shari Ann Keeler, and granddaughter Jeana Behring, daughter in law Norma DeCoster A memorial service will be held on Friday, October 22, 2021 at 1:00 pm at Faith Bible Church in Chanute with burial to follow at Neosho County Cemetery. Memorials have been suggested to Countryside Funeral Home to help with the funeral expenses and may be left with or mailed to the funeral home. Online condolences may be left at: www.countrysidefh.com. Services entrusted to Countryside Funeral Home 101 N Highland, Chanute, KS 66720.

Patricia Dorothy Briley, 87, of Chanute passed away on Tuesday, October 12, 2021. Patricia was born on September 6, 1934 in Chicago, IL, the daughter of Alfred and Dorothy (Osterling) Boardman. Patricia grew up in Chicago and graduated from... View Obituary & Service Information

The family of Patricia Dorothy Briley created this Life Tributes page to make it easy to share your memories.

Patricia Dorothy Briley, 87, of Chanute passed away on Tuesday,...

Send flowers to the Briley family.