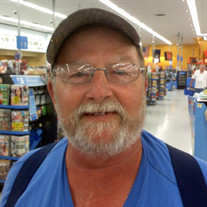 Paul Dwight Smith, age 66, of Humboldt KS, passed away Tuesday, December 31, 2019 in Wichita Kansas after a short illness. He was born on February 25, 1953 in Chanute, KS, the son of Leslie Richard (Dick) and Ruth Marie (Howerton) Smith. Paul graduated from Chanute High School in 1971 and served in the US Navy in damage control. He was an amateur radio operator, call sign N0NBD, and a member of the the 4-State QRP, Amateur Radio Club. He was a member of Virginia Lodge #315, AF & AM Savonburg, KS and Elks Lodge #806, Chanute, KS. Paul belonged to the Humboldt United Methodist Church. He served as a scoutmaster for the BSA in Humboldt and as an assistant scoutmaster in Chanute. Paul retired from Neosho County Community College in 2014 after 24 years of service. He was an avid fisherman, RV’er, Nascar follower, NHL Hockey fan and enjoyed soccer and rugby. He played numerous musical instruments. Paul married Sarah Lorraine Smith in 1972; she survives him at the home. Paul is also survived by sons: Leslie Allen (Angie) Smith and Dwight Richard Smith, both of Humboldt, KS. Sisters: Connie Ruth (John) Clarkson of Arma, KS, and Peggy Smith (Mike) Myers; 4 Grandchildren: Kyle Martin, Sarah Smith, Brittany (Jasper) Haskins and Joshua Smith; 2 Great Grandchildren: Braydon Allen Smith and Rocky Paul Haskins, and many nieces and nephews. Memorial service will be held on Friday, January 10, 2019 at 10 a.m. at the Humboldt United Methodist Church, Humboldt, KS. Memorials may be made to Neosho County Community College Foundation Plaza Project or the Humboldt United Methodist Church and may be left with or mailed to the funeral home. Arrangements have been entrusted to Countryside Funeral Home, 908 Central, Humboldt, KS 66748.

The family of Paul Dwight Smith created this Life Tributes page to make it easy to share your memories.

Send flowers to the Smith family.