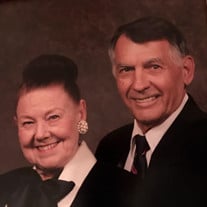 Pearl Blancett, 94, of Chanute, KS passed away peacefully at Westgate skilled nursing facility, Joplin, MO on Thursday, September 12, 2019 following a long illness. Pearl was born February 18, 1925 in Neosho County east of Chanute and was the oldest daughter of Nola Ruth Webb and Warren Hoyt Alford. She is survived by her four siblings; Warren Alford, Alfred Allison, Ronald Allison of Chanute and Barbara Allison Deane of Wichita. Pearl was married to Thomas J. Blancett II, of Pittsburg, KS for 54 years who preceded her in death. Thomas II, and Pearl were active members of the American Legion Post 170, VFW and he was a successful local business man, owner of Institutional Furnishing & Supply Co., Aroyln Heights senior care facility, Golden Venture, Inc., and a USMC WWII veteran, Iwo Jima survivor. He also served as president of the Chanute School Board, USD 413. Pearl is survived by her oldest son Thomas J. Blancett III, and daughter-in-law Donna Bowman Blancett of Chesapeake, VA, and a second son, Rick M. Blancett of Carthage, MO. Pearl has two Grandchildren, Thomas J. Blancett IV, of Flower Mound, TX and Christopher B. Blancett of Yorktown, VA. She loved her adorable great granddaughters, Ava, Cora and Bria in TX and Claire in VA. A native of the Chanute area, Pearl graduated from Chanute High School and during WWII was employed by Boeing Aircraft in Wichita where she contributed to the war effort. Following the war she relocated back to Chanute where she met and married Robert L. Stevenson, who died in a railroad accident in 1947. Pearl remarried in 1950 and had a successful career with Southwestern Bell Telephone Company where she was employed as a switchboard operator in Chanute and later retired. She enjoyed family, friends, boating and camping at Grand Lake in OK, campaigning for U.S. Senator Bob Dole, riding her horse Buckie in Chanute parades and cheering her grandson, Thomas IV, at Pitt State football games. She will always be remember for her color coordinated attire, her chili recipe and spaghetti and meat ball dinners. She was kind, loving and always had a pleasant nature about her. Until her move to Carthage, MO, she was a life-long member of the First Christian Church of Chanute. Visitation will be on Wednesday, September 18, 2019 from 10-11 a.m. at the First Christian Church in Chanute, KS. Funeral services will at 11 am at the church. Burial will follow the service at Memorial Park Cemetery. Online condolences may be left at: www.countrysidefh.com. The family suggests memorials to be made to the First Christian Church and may be left with or mailed to the funeral home. Arrangements have been entrusted to Countryside Funeral Home, 101 N. Highland, and Chanute, KS 66720.

The family of Pearl Blancett created this Life Tributes page to make it easy to share your memories.

Pearl Blancett, 94, of Chanute, KS passed away peacefully at...

Send flowers to the Blancett family.