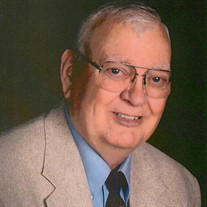 Ralph Robert Berthot ,85, of Chanute passed away on Thursday, May 12, 2022 at The University of Kansas Health System in Kansas City. Ralph was born on February 13, 1937, in Chanute, the son of Harry Thomas and Agnes (Gaughn) Berthot. Ralph grew up in Chanute and in 1955 graduated from Chanute High School. After attending a year of college, Ralph joined the United Sates Army and served his country honorably until 1959. He began working for the City of Chanute in 1968 and retired in 1997 as the superintendent of the water treatment plant. On January 18, 1964, Ralph married the love of his life Jackie Marts at St. Patrick’s Catholic Church in Chanute. They had been married for 58 years at the time of Ralph’s passing. Ralph loved his wife, children, and his grandchildren, and would spend as much time with his family as he possibly could. He also enjoyed fishing and hunting. Ralph built homes and put many roofs on houses in Chanute with his father Harry. Ralph was also a fan of all Kansas sports teams; especially the Kansas City Chiefs and Kansas City Royals. He was a very active member at St. Patrick’s Catholic Church where he was a eucharistic minister for many years. The one thing that Ralph will be remembered for is being a selfless man that would give the shirt off of his back to somebody in need, even if it was his last. Ralph is survived by: His wife: Jackie Berthot of Chanute, KS Three sons: Jeff Berthot and his wife Patty of Douglass, TX Mike Berthot of Chanute, KS, and his wife Mikal of Yates Center, KS Tim Berthot of Chanute, KS Two Brothers: Francis Berthot of Yates Center, KS Bill Berthot of Bull Shoals, AR Two Sisters: Pat Johnston of Hartshorne, OK Rosemary Berthot of Chanute, KS Grandchildren: Ricky Swanson Brandon Swanson Sarah Swanson-Strack Braxton Berthot Bryce Berthot Alec Berthot Asia Larson Tyler Brotherton Three Great-Grandchildren Numerous nieces and nephews Ralph was preceded in death by his parents Harry and Agnes, daughter Dietricha Swanson, grandson Brayden Berthot, and two brothers: Gerald Berthot and Richard Berthot. Rosary will be recited on Tuesday, May 17, 2022 at 9:30 am followed by Mass at 10:00 am at St. Patrick’s Catholic Church in Chanute. Burial will be at St. Patrick’s Catholic Cemetery in Chanute. Memorials to St. Patrick’s Catholic Church or the Knights of Columbus are welcomed and may be sent to [email protected] Online condolences may be left at: www.countrysidefh.com. Services entrusted to Countryside Funeral Home 101 N. Highland, Chanute, KS 66720.

Ralph Robert Berthot ,85, of Chanute passed away on Thursday, May 12, 2022 at The University of Kansas Health System in Kansas City. Ralph was born on February 13, 1937, in Chanute, the son of Harry Thomas and Agnes (Gaughn) Berthot. Ralph grew... View Obituary & Service Information

The family of Ralph Robert Berthot created this Life Tributes page to make it easy to share your memories.

Ralph Robert Berthot ,85, of Chanute passed away on Thursday,...

Send flowers to the Berthot family.