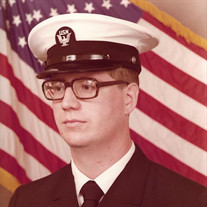 Randall David “Randy” Johnson, 65, of Leavenworth, Ks., formerly of Chanute, Ks., entered into Heaven in the early morning hours of March 22, 2022. Born in Topeka, Ks. on March 17, 1957, Randy was the third of four sons borne to Gene F. and Donna J. (Smith) Johnson. Randy grew up in Chanute, attended Chanute schools, and graduated with the Class of 1975. After graduation, Randy enlisted in the United States Navy and made that his professional career with 20 years of active duty and 10 years in the Reserves, retiring in 2004 with the rank of CTM1 (Cryptology Technicians Mate, First Class) as a Communications and Mathematics Instructor. After Basic Training at Great Lakes, his duty stations were Pensacola, Fla., Pearl Harbor, Hawaii, Subic Bay (Manila, Philippines), and San Diego, Calif. Randy’s sea duty was aboard the U.S.S. John Rodgers in the Persian Gulf. Randy’s memberships include First Baptist Church, Boy Scouts of America, and Cedar Lodge #103, A.F. & A.M., all of Chanute. Randy was predeceased by his grandparents, father Gene, one brother, Gary, and his daughter Sarah. Survivors are his mother, Donna, two brothers Michael and Robert, all of Chanute, sister-in-law, Clarice, one nephew, Jason, both of Gardner, Ks., one niece, Jennifer of Henryetta, Mo., and his granddaughter, Oleescia, of Pensacola, Fla. Memorial service will be held at 10:00 a,m,, Saturday, May 14, 2022, at First Baptist Church, Good News Center (GNC), with final rest being in Leavenworth National Cemetery, Leavenworth, Ks., at 10:00 a.m., Monday, May 16, 2022. Naval Honors at final rest entrusted to Patriot Guard of Leavenworth. Memorials are suggested to the American Cancer Society or to First Baptist Church Deacon’s Fund. Online condolences may be left at: www.countrysidefh.com.

The family of Randall David Johnson created this Life Tributes page to make it easy to share your memories.