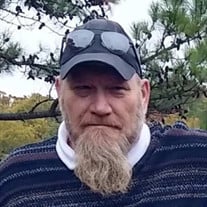 Randall Edward Kennedy, Son, Brother, Father, Papa and Friend, age 47, lit his last Pall Mall on Saturday, August 14, 2021 before heading to his forever home where his Grandpa Harlan is likely waiting with a shot of whiskey and a cold beer. He was born July 24, 1974 to Marvin Kennedy and Judy (Chaney) Hoffman kicking and screaming and continuously tested their love and patience for all the years of his youth (and then some.) On August 15, 2008, he married Amy Zirjacks, who brought equal parts joy and grief to his life. She miraculously survives in Afton, Oklahoma but only by the grace of God because we all know she’s a mouthy one! Randall was a jack of all trades and a master of none. This man could keep a vehicle running down the road with bread ties, pipe glue and some type of MacGuyver-esque witchcraft. But his special talents would be his amazing carpentry and his ability to piss off Amy. Randall loved his friends, he loved his family but most of all he loved his boys and grandbabies. Because adulting is hard and life is short he did not get to spend as much time with his boys or his grandchildren as he wanted. But man, were they loved! He leaves behind four devastated sons and three daughters in law: Owen Kennedy, of the home, Ethyn and Emily Kennedy, Afton, OK, Haydon and Jojo Kennedy, Jenks, OK and Hyson and Cierra Zirjacks of Joplin, MO. Randall was Papa to Wyatt, Abbie, Milo, KynLee and Luxten while on this earth. He will now be Papa to his beautiful heavenly granddaughter, Liberty “Libby” Faye Kennedy, who preceded him in death. In addition to Libby, he is preceded in death by his grandparents, his mother Judy, and his stepmother Virginia. Additional surviving family members are his father Marvin, Chanute, KS, stepfather Ralph “Byron” Hoffman, Thayer, KS, siblings Bob and Linda Kennedy, Portland, OR, Jane Kennedy, Portland, OR, Russell and Shannon Tarvin, Ames, IA, Elinor “Nory” and Richard Graham, Kimble, KS, Marvin and Cailynn Kennedy, DeSoto, KS, James Hoffman, Thayer, KS and Donald and Renae Kennedy, Chanute, KS as well as multiple nieces and nephews that Randall loved dearly. The family will receive friends at visitation from 5:00 to 7:00 PM on Friday, August 20, 2021 at Countryside Funeral Home, 101 N. Highland, Chanute, KS 66720. Cremation will take place after visitation. The family will hold a private graveside service at a later date. Services entrusted to Countryside Funeral Home, 101 N. Highland, Chanute, KS 66720

Randall Edward Kennedy, Son, Brother, Father, Papa and Friend, age 47, lit his last Pall Mall on Saturday, August 14, 2021 before heading to his forever home where his Grandpa Harlan is likely waiting with a shot of whiskey and a cold beer.... View Obituary & Service Information

The family of Randall Edward Kennedy created this Life Tributes page to make it easy to share your memories.

Send flowers to the Kennedy family.