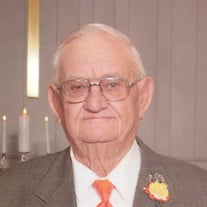 Raymond Karl Reutlinger, age 91, passed away Sunday, December 13, 2020 at Wilson County Medical Center in Neodesha, KS. Raymond was born November 22, 1929 to Theodore and Goldie (Province) Reutlinger in a rural home near Freedom, Oklahoma. Raymond was one of four children including his sisters Vivian and Betty, and brother, Donald. Raymond attended Daycreek and Lookout grade schools before attending Freedom High School, where he graduated in 1947. Raymond married Virginia Lee Massey on February 10, 1951 in Kiowa, Kansas. They lived and farmed in rural Oklahoma for 10 years. During that time, they had two sons, Danny and Gary. In 1961 they purchased a farm north of Fredonia, where he lived until his passing. During the early 1960’s, they were blessed with two more sons, Randy and Tony. During his time near Fredonia, he served on the Prairie Township Rural Water Board, Fredonia Coop Board, Rural Electric Coop Board, and the Prairie Township Rural Fire Department. He loved to hunt, fish, play cards and play bingo until he wasn’t able to get around anymore. He loved being around family and enjoying holidays and other celebrations with his kids and their families. Raymond was preceded in death by his parents Theodore and Goldie (Province) Reutlinger, wife Virginia (Massey) Reutlinger, son Tony Reutlinger, sister Vivian (Reutlinger) Kamp, brother-in-law Fred Cushenberry, and sister-in-law Louise East Morrison. Raymond is survived by three sons Danny (Linda) Reutlinger of Owasso, Oklahoma Gary (Michele) Reutlinger of Fredonia, Kansas Randy (Rose) Reutlinger of Fredonia, Kansas Brother, Donald (Janell) Reutlinger of Freedom, Oklahoma Sister Betty Cushenberry of Pratt, Kansas 9 grandchildren, 13 great-grandchildren, numerous nieces, nephews, and cousins. Visitation will be held on Tuesday, December 15, 2020 from 5:00 to 7:00 pm at Countryside Funeral Home, Fredonia, Kansas Celebration of Life Services will be held on Wednesday, December 16, 2020 at 10:30 am at Countryside Funeral Home, Fredonia, Kansas Interment will follow in Fredonia City Cemetery Memorial contributions can be made to the Wilson County Rural Fire Department and can be mailed to or left with the funeral home. Services entrusted to: Countryside Funeral Home, 420 S. 20th, PO Box 247, Fredonia, Kansas 66736

The family of Raymond Karl Reutlinger created this Life Tributes page to make it easy to share your memories.

Send flowers to the Reutlinger family.