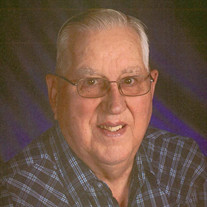 Richard Neal Greve 88, of Chanute passed away suddenly at KU Medical Center on Tuesday, March 30, 2021. Richard was born on September 30, 1932 in rural Chanute, KS the son of Clarence and Louise (Friederick) Greve. Richard was raised on the family farm east of Chanute. In 1957, Richard joined the U.S. Army and served at Ft. Sam, Houston, TX until receiving his honorable discharge. Upon his return to Chanute, he purchased a farm east of town. Richard got a job as a machinist, working 28 years at GEO Churchill. He continued on with his passion of farming and ranching. Richard was a lifetime member of the American Legion Post 170, a lifetime member of the Chanute Elks Lodge 806, and a recent member of the VFW Auxiliary. Richard was a devout Catholic and lifelong parishioner of St. Patrick's Catholic Church, Chanute. Richard enjoyed building trailers, rebuilding/restoring, and driving tractors in the local parades. He also enjoyed going camping, listening to country music, going to dances, and spending time with family. On November 22, 1969, Richard married Jean Leroy. They raised their two sons on the family farm. Richard and Jean were married for 51 years. Including his wife Jean, Richard is survived by: Sons: Mike Greve and wife Melanie of Chanute, KS Mark Greve and Lori Tinsley of Chanute, KS Siblings: Marjorie Hobbs of Benedict, KS Ilene McCoy and husband Gerald of Shawnee, KS Sister-in-law Phyllis Greve of Chanute, KS Grandchildren: Mason and Madan Richard was preceded in death by his parents, and brothers Robert, Wayne, and Merle Greve. Mass of Christian burial will be held on Wednesday, April 7, 2021 at 11:00 am at St. Patrick Catholic Church in Chanute, burial to follow at St. Patrick Cemetery Chanute, with rosary at 10:15 am prior to the service. Public visitation will be held on Tuesday, April 6, 2021 from 5-7 pm at the funeral home. Memorials have been suggested to the American Cancer Society and may be left with or mailed to the funeral home. Online condolences may be left at: www.countrysidefh.com. Services entrusted to: Countryside Funeral Home 101 N. Highland, Chanute, KS 66720

Richard Neal Greve 88, of Chanute passed away suddenly at KU Medical Center on Tuesday, March 30, 2021. Richard was born on September 30, 1932 in rural Chanute, KS the son of Clarence and Louise (Friederick) Greve. Richard was raised on the... View Obituary & Service Information

The family of Richard Neal Greve created this Life Tributes page to make it easy to share your memories.

Richard Neal Greve 88, of Chanute passed away suddenly at KU...

Send flowers to the Greve family.