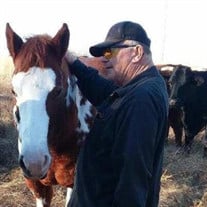 Richard “Rich” Hall, age 64 of Fredonia, KS passed away August 20, 2020 at Fredonia Regional Hospital. Rich was born June 25, 1956 in Fredonia, KS to Dale and Ruth (Hoyt) Hall. He was raised in Fredonia alongside 4 siblings, and graduated from Fredonia High School in the class of 1974. Rich’s dad passed when he was a young man and so he adopted Ernie Erbe as a role model, who ended up being a great friend for life. In 1999, Rich married Sharon Row. Although they later divorced, he was blessed with 2 men that call him dad, Terry and Tyler. Rich had many jobs during his life, from farm hand, to EMT-I-D, to most recently store associate at Orscheln Farm and Home in Independence. He loved to watch westerns, especially John Wayne movies, but his true hobby was helping other people. It didn’t matter what you needed help with, Rich was there. Rich is survived by sons: Terry Row and wife Kandy of Chanute, KS Tyler Row and wife Tracy of Fredonia, KS 7 Grandchildren 9 Great-Grandchildren Brother, Lee Joy of Fredonia, KS Many nieces and nephews He was preceded in death by his parents, brothers, Jim and Bob, and sister Kate. Visitation for Richard will be held on Thursday, August 27, 2020, from 5-7 pm at Countryside Funeral Home, Fredonia, KS Per Rich’s request, cremation will take place after visitation. Memorial contributions in Rich’s name can be made to the Fredonia Adopt-A-Family or the Fredonia Childcare Center and can be mailed to or left with the funeral home. Services entrusted to: Countryside Funeral Home, 420 S. 20th, PO Box 247, Fredonia, KS 66736

The family of Richard "Rich" Hall created this Life Tributes page to make it easy to share your memories.

Send flowers to the Hall family.