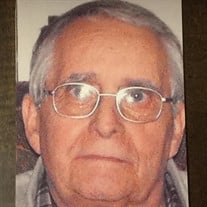 Richard Blaine “Dick” Scott passed away Sunday, July 28, 2019 in Independence, KS. Dick was born April 11, 1943 to Blaine and Vivian (Calvert) Scott in Guymon, OK. He began school in Hooker, OK and finished in Borger, TX after the family moved there in 1952. He was an Army veteran who served as a medic at a military hospital in Japan. He helped set up the hospital that was specifically to treat soldiers injured in Viet Nam. After his military service he returned to his work with Ideal Food Stores. He managed several stores in Texas before moving to the Elk Falls, KS area where he worked for Elk County and eventually retired from the Public Works Department. He married Kathleen "Kathy" Hines in 1994 and they made their home in Elk Falls. Dick is survived by his wife Kathy of the home Daughters April (Scott) Wells of Canyon, TX Whitney (Gary) Clark of Canyon, TX Karen (Michael) Anderson of Moline, KS Sons Thom (Tammy) Scott of Richmond, VA Doug (Kelly) Hines of Howard, KS Brother, Ron (Linda) Scott Sister, Karen (Bob) Stone Numerous grandchildren and great grandchildren. Viewing will be Saturday, August 3, 2019 from 10:30 to 11:30 am at Countryside Funeral Home in Howard, KS Funeral Service will be Saturday, August 3, 2019 at 11:30 am at Countryside Funeral Home in Howard, KS In lieu of flowers, Dick asked that memorials be made to the Elk Falls Senior Center or Harry Hines Hospice, and can be left with or mailed to the funeral home. Online condolences can be left at: www.countrysidefh.com Serviced entrusted to: Countryside Funeral Home, 206 E. Washington, PO Box 1233, Howard, KS 67349

The family of Richard "Dick" Scott created this Life Tributes page to make it easy to share your memories.

Send flowers to the Scott family.