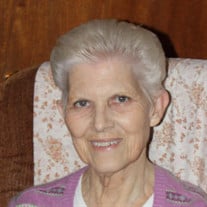 Rita Maxine Owens, 85, a resident of Fredonia, KS, passed away on Monday March 7, 2022 at Fredonia Regional Hospital. She was born on October 25, 1936 in Lone Oak, Texas to William “Bo” and Sybil (Reed) Bowman. On November 23, 1954, Rita married Tom Owens and began her lifelong career as a military wife and homemaker. She and Tom had two daughters, Janie and Theresa. Rita and Tom were married 54 years until Tom’s passing in 2008. Rita and Tom spent several years in Texas, California, and Oklahoma but after Tom retired, they moved to Fredonia to be near family. Rita’s life revolved around her home, her husband, children and later, grandchildren and great grandchildren. The legacy she leaves behind as a wife, mother and grandmother will be dearly missed and never forgotten. Rita leaves behind: Her daughters Janie Gillett (Jim Dark) of Fredonia and Theresa Mellen of Washington Grandchildren Christopher Jessica (David) Marissa (Chris) Tracy (Jason) Jerry Courtenay (Tim) 9 Great-Grandchildren And 2 Great-Great-Grandchildren In addition to her husband, Tom, she was preceded in death by: Her parents, William and Sybil A grandson, Matthew Three brothers And one sister Cremation has been requested with a memorial graveside service to be held at Weakley Cemetery in New Albany, KS Friday, March 18, 2022 at 1:30 pm. Online condolences can be left at www.countrysidefh.com. Services entrusted to Countryside Funeral Home, 420 S. 20th St., P.O. Box 247 Fredonia, KS 66736.

The family of Rita Maxine Owens created this Life Tributes page to make it easy to share your memories.

Rita Maxine Owens, 85, a resident of Fredonia, KS, passed away...

Send flowers to the Owens family.