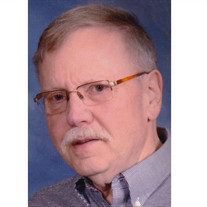 Robert V. "Bob" Horn, 75, of Chanute, passed away on Friday, March 5, 2021 at Kansas Heart Hospital, Wichita, KS. Born on November 3, 1945 in Coffeyville, KS to Vernon and Helen (Howland) Horn, Bob graduated from Field Kindley Memorial High School in Coffeyville, Class of 1963. With the Boy Scouts of America, he was an assistant scout master, obtained Eagle rank, and was a Brotherhood member of the Order of the Arrow. He had been a long-time S.E. Kansas resident and was a member of the Humboldt United Methodist Church. He received an A.A. degree in Pre-Professional Studies (1965) from Coffeyville Community College. He also received a B.S. degree in Behavioral Science (1973) and M.S. degree in Counseling Psychology (1974) from Kansas State University. He also earned an Ed. S. degree for Applied Educational/School Psychology (1984) from Pittsburg State University. He was a member of Phi Delta Kappa and Phi Kappa Phi. He served honorably as a non-commissioned U.S. Coast Guard officer from 1968-1972, becoming a Radioman 2nd Class. In particular, his tour of duty onboard the USCG Cutter Ironwood in Homer, Alaska gave him many fascinating experiences. He was also a member of the American Legion Post 170. On December 18, 1971 Bob married Janice Kay Messersmith at the Presidio in San Francisco, CA. They celebrated nearly 50 wonderful years of marriage together. Throughout his career, Bob specialized in social and mental health rehabilitation. He was a Senior Vocational Rehabilitation Counselor for S.E. Kansas and an Applied Educational Psychologist throughout various school systems in KS and MO. He also received Vocational Rehabilitation Counselor of the Year in 1979. Music was very important throughout his entire life. Besides learning the piano and various banjos/guitars during his childhood, he started playing the tenor trombone in junior high and continued in several marching, concert, and military bands. He also sang tenor in different groups, including church choirs and the Southeast Kansas Shavers barbershop group. Starting in the 1990s, he would play trombone for numerous bands in the Chanute area, including the Tioga Township Dixieland Jazz Band, Jack's Hot Cats, Brass Arts, and the Sauerkraut Oompah Band. At the same time, Bob discovered a passion for folk and celtic instruments, especially hammered dulcimer, mountain dulcimer, and celtic harp. He personally handcrafted dozens of wood folk instruments, including dulcimers, harps, bowed psalterys, and lyres. Bob would use these instruments to perform a one-man show, entertaining and educating both kids and adults alike. Robert is survived by his wife Janice of Chanute, KS, his son Justin and daughter-in-law Amy of Parkville, MO, his sister Marilyn and brother-in-law Garry of Bella Vista, AR, many nieces and nephews, and several cousins. Preceding him in death were his parents Vernon and Helen. A celebration of life service will be held Saturday, May 15, 2021 at 10:00 AM at the Otterbein United Methodist Church in Chanute with burial to follow at Memorial Park Cemetery. Online condolences may be left at: www.countrysidefh.com Services under the direction of Countryside Funeral Home 101 N. Highland, Chanute, KS 66720

The family of Robert V. Horn created this Life Tributes page to make it easy to share your memories.

Send flowers to the Horn family.