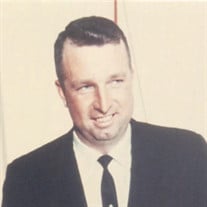 Robert “Bob” Franklin Huser, age 86 of Neodesha, KS passed away October 2, 2020 at Golden Living Care Facility in Neodesha, KS Bob was born in 1934 in rural Neodesha, KS, to Frank and Jessie (Kingston) Huser. He grew up in the Neodesha area alongside one sister, Thelma, and graduated from Neodesha High School in the class of 1951. On May 12, 1956, Bob married Shirley Hare. They were married 64 years, and although they didn’t have any children, they had two fur babies that were part of the family, Rocky and Tanner. Bob served his country for 2 years in the United States Army before coming home and moving to the farm north of Neodesha in 1958. He and Shirley spent the next 55 years farming there until they decided to move to town in 2013. Alongside farming, Bob also sold Dekalb seed. One year, he won the National Soybean contest, and his prize was a trip to Washington D.C., where he got to meet the Vice President. Since there wasn’t much farming to do in the winter time months, Bob would haul boats around the country for Starcraft, and Cobalt Boats. Later in life, they bought a 5th Wheel camper, and would travel to Arizona and then Texas to spend a couple months to get away from the Kansas winters. Bob and Shirley both held their private pilot licenses, and owned a Cessna 172, which they flew all over the country. Bob is survived by his wife, Shirley Huser Brother-In-Law, Sam Hare and wife Ruth of Onalaska, Texas Sister-In-Law, Dorothy Hare of Neodesha, Kansas Nieces: Connie Burkhead of Neodesha, Kansas Angela Gentry and husband Kenneth of Lincoln, Arkansas Allison Hare of Fayetteville, North Carolina Lorrie Hare of Texas Nephews: Kevin Hare and wife Sara of Texas John Hare and wife Deanna of Fayetteville, North Carolina Terry Hare and wife Thersa of DeQueen, Texas Lee Hare of Chandler, Oklahoma He was preceded in death by his parents, Frank and Jessie Huser, sister, Thelma Schuman, In-Laws, Roy and Vergie Hare, brothers-in-laws, Jim Hare and Melvin Hare and wife Jean, and his fur babies, Rocky and Tanner. Per Bob’s wishes, cremation has been requested with no services planned. Memorial contributions can be made to the Neodesha Senior Center or the organization of your choice and can be mailed to or left with the funeral home. Services have been entrusted to: Countryside Funeral Home, 420 S. 20th, P.O. Box 247, Fredonia, KS 66736

The family of Robert "Bob" Huser created this Life Tributes page to make it easy to share your memories.