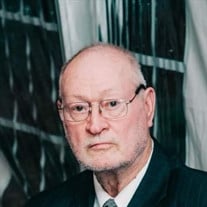 Robert B. Leedy, 87, of Chanute passed away on Thursday, September 2, 2021. Robert was born on November 22, 1933 in Neosho Falls, KS, the son of Eugene and Gladys (Lynn) Leedy. Robert attended Neosho Falls High School, and on July 16, 1955, married Naomi Ruth Garner before being drafted into the U.S. Army, serving for four years. Upon his return to Kansas, Robert worked at Kustom Signals in Chanute until he started his own oil field business and later his own lime stone art business. Robert enjoyed spending time with his family, especially going on gold prospecting trips to Colorado. Robert is survived by: His Wife: Naomi Leedy of Chanute, KS Three Sons: Michael and wife Angie Leedy of Chanute, KS Paul Leedy of Chanute, KS John and wife Tammy Leedy of Chanute, KS Daughter: Anita Savala of Chanute, KS 13 Grandchildren 19 Great-grandchildren Robert was preceded in death by his parents, his sister, Marylynn Beaman and his brother, Jay Leedy. Visitation will be held on Thursday, September 9, 2021, from 5:00 PM to 7:00 PM at Countryside Funeral Home, 101 N. Highland, Chanute, KS 66720. Memorials have been suggested to the Dementia Society of America and may be left with or mailed to the funeral home. Online condolences may be left at: www.countrysidefh.com. Services entrusted to Countryside Funeral Home 101 N. Highland, Chanute, KS 66720.

The family of Robert Burns Leedy created this Life Tributes page to make it easy to share your memories.

Robert B. Leedy, 87, of Chanute passed away on Thursday, September...

Send flowers to the Leedy family.