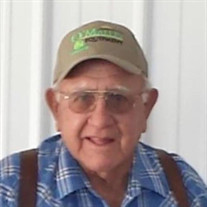 Robert Warren “Bob” Shay, age 81 of Fredonia, KS, passed away Monday, September 28, 2020 at his home. Bob was born March 4, 1939 in Wilson County to William and Frankie (Parks) Shay. He grew up in the Fredonia area alongside 8 brothers and sisters. Bob attended several country schools through the 8th grade, then attended Fredonia High School, graduating in the class of 1957. On February 8, 1965, Bob married Irene Palmer in Fredonia, KS. They raised one son, and were married 50 years until her passing in 2015. Bob was a lifelong farmer and rancher, as well as business owner for many years. He started working at the Berckefeldt Dairy in 1963, then took over the Hiland Dairy in 1978. He owned that business until his retirement in 2011, when the business was passed on to a nephew (Carl Shay). The Hiland Dairy continues in the Shay name, even as a great nephew (Jacob Marr) purchased the business in 2017. In Bob’s spare time, he liked to hunt and fish. He also loved being a grandpa, and then later great-grandpa. Bob is survived by his son, Pat Shay and wife Karla of Fredonia, KS 2 granddaughters: Danni and husband Dillion of Fredonia, KS Marcy Shay of Lawrence, KS 2 great-granddaughters: Aubree and River Guffey of Fredonia, KS. Brother, Mike Shay and wife Eva of Altoona, KS Sisters: Nellie Claibourn of Fredonia, KS Linda Crain and husband Tom of Fredonia, KS many, many nieces and nephews. He was preceded in death by his parents, brothers Bud, George, and Frank, and sisters Murdene Weatherby, and Isabelle White. Funeral Service will be held on Monday, October 5, 2020 at 10:00 am at Countryside Funeral Home, 420 S. 20th, Fredonia, KS 66736 Visitation will be held on Sunday, October 4, 2020 from 5-7pm at the funeral home. Memorial contributions are suggested to the American Cancer Society or the American Diabetes Association and can be mailed to or left with the funeral home. Services entrusted to: Countryside Funeral Home, 420 S. 20th, PO Box 247, Fredonia, KS 66736

The family of Robert "Bob" Shay created this Life Tributes page to make it easy to share your memories.

Send flowers to the Shay family.