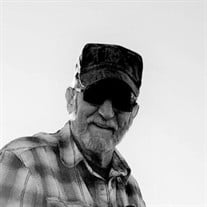 Robert Bruce Wilson, age 75 of Moline, Kansas, passed away Thursday, May 13, 2021 at his home. Robert was born August 9, 1945 in Winfield, Kansas to Vernon and Esther (Cougher) Wilson. He grew up with 3 brothers on the family farm north of Moline. He attended Moline High School, graduating in the class of 1963. He then attended Independence Community College. In March 1967, Robert enlisted in the Kansas Army National Guard, serving his country for 6 years. In November of the same year, he married a young woman he had dated in High School, Sherry Smith. Together they raised their two sons Craig and Mark, and enjoyed 53 years together. After serving his country, Robert went to work for Shore Construction in Burden, KS for a while, then the Moline Locker. After working there 9 years, he and Sherry purchased the Locker and ran it together for the next 15 years. He then went to work for the Moline City water department as Superintendent. All the while, Robert farmed and raised cattle. He didn’t have many hobbies, but in his younger years, he made sure to take Sherry out dancing on Saturday nights, which they loved to do. After retiring, Robert was known to say he’d worked his whole life so he could retire and watch his grandkids play sports. He absolutely loved going to whatever sport they were in just to watch them. Robert was the Commander of the Moline American Legion for several years, and the current Vice President of the Elk County Rodeo Association. He was proud that his dad was one of the original founders of the Association many years ago. He was the go-to guy in the area if you needed help getting anything done, and was part of the Moline Keystone Construction group. He also served on the Elk County Volunteer Rural Fire Department. He is survived by his wife Sherry of the home. Sons Craig Wilson and wife Gina of Howard Mark Wilson and companion Mandy Lamphier of Augusta Grandchildren Tristen Wilson of Emporia Skylar Harrod of Elk City Brother, David Wilson of Buckeye, AZ He was preceded in death by his parents, grandson, Damon Wilson, and brothers, Johnnie Wilson and Steven Wilson Visitation will be held on Tuesday, May 18, 2021 from 5:00 to 7:00 PM at Countryside Funeral Home, Howard, Kansas Funeral Service will be on Wednesday, May 19, 2021 at 2:00 PM at the funeral home Per Robert’s wishes, cremation will take place after the funeral service Memorial donations can be made in Robert’s memory to the Elk County Rodeo Association and can be mailed to or left with the funeral home. Services entrusted to Countryside Funeral Home, 206 E. Washington, PO Box 1233, Howard, KS 67349

Robert Bruce Wilson, age 75 of Moline, Kansas, passed away Thursday, May 13, 2021 at his home. Robert was born August 9, 1945 in Winfield, Kansas to Vernon and Esther (Cougher) Wilson. He grew up with 3 brothers on the family farm north... View Obituary & Service Information

The family of Robert B. Wilson created this Life Tributes page to make it easy to share your memories.

Send flowers to the Wilson family.