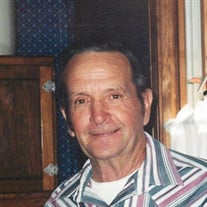 On March 22, 2020, Robert Bruce Winn of Howard, KS passed at the age of 83. Bob was born on April 7, 1936 in Howard, KS to Lester and Genevieve (Cox) Winn. He had 7 brothers and 7 sisters. On July 17, 1955, Bob married Shirley Ann Rader of Piedmont, KS. They were married for 64 years. Bob was a member of the Howard City Council for almost 30 years. He was also a member of the Howard Saddle Club. He had a love for paint horses and a passion for riding. He also enjoyed being outdoors and working with cattle. He went to work at Ames Chevrolet in 1963 and later on became part owner. He worked there for many years until the dealership closed. Bob then went to work at Jarvis Auto Supply in El Dorado, KS until he retired. Bob is survived by his wife Shirley Children: Gail Moore and husband Mike of Saint George, KS Debbie Winn of Florence, KS Ted Winn of Howard, KS 7 grandchildren: Tamara, Curtis, Angie, Megan, Chelsea, Carroll, and Heath 13 great-grandchildren He was preceded in death by his father Lester, mother Genevieve, and 14 brothers and sisters. Under the current health and safety circumstances we are in, the family will be holding a private funeral service. Memorial contributions in Bob’s name can be made to the Howard United Methodist Church and can be mailed to or left with the funeral home. Services entrusted to: Countryside Funeral Home, 206 E. Washington, PO Box 1233, Howard, KS 67349

The family of Robert Bruce Winn created this Life Tributes page to make it easy to share your memories.

Send flowers to the Winn family.