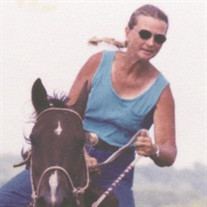 Roberta Lynn McPurdy, 72, a rural Neodesha resident, died Nov. 28, 2020, as a result of an auto accident. She was born Sept. 8, 1948, to William Patrick and Pauline Faye (Medearis) McPurdy in Neodesha. On April 9, 1965, she married Wayne Daniel Bronson in Fredonia. She and Wayne had two daughters, Tina and Patricia; later the couple divorced. On May 5, 1972, she married Richard “Dick” Dean Ostrander in Miami, Okla. Although the couple divorced in 1983, the two remained friends and continued to spend holidays together often through the years. Roberta was also briefly married to Larry Jarrett and Dennis Drake. She worked at LaDow and Spohn in Fredonia for almost 10 years before quitting to break horses full-time instead of as a side job. She was employed as the head trainer by Flint Oak in Fall River until they sold the Paso Fino operation to a ranch in Chesterfield, Mo.; Roberta went with the horses and was the head trainer in Missouri for eight years before moving back to Kansas. Upon returning to Wilson County, Roberta was employed at the Altoona Sub District shop as an equipment operator for the Kansas Departmen of Transportation. She remained with KDOT for almost 15 years before taking an early retirement. The one constant in Roberta’s life was horses. She rode her first horse at the age of two and didn’t stop. Roberta competed in barrel racing, for fun as a member of the Fredonia Saddle Club and the Toronto Saddle Club, as well as competitively as a member of Kansas Barrel Horse Association, National Barrel Horse Association, SEK Appaloosa Association, and Hebb Rodeo Association. She also competed in the Kansas Invitational Old-Timers Rodeo Association. Throughout the years she won many buckles, tack, and money at this pastime. Her proudest accomplishment was winning the Clem McSpadden Pasture Barrel Race in Bushyhead, Okla., twice. Survivors include her brothers Richard McPurdy of Parsons Patrick (Rose Marie) McPurdy of Burns, Ore. Mark (Barbara) McPurdy of Hesperia, Calif. Daughters “Trish” JuAire of Neodesha (temporarily of Hamilton) Tina Ream of Texas Four grandchildren Hannah JuAire, Wyatt JuAire, Erin Shively, and Kolt Ream Two great-grandchildren. Her parents and her son-in-law, Joe JuAire, preceded her in death. Cremation has taken place. Graveside Memorial service will be held on Saturday, April 24, 2021 at 11:00 AM, at the Coyville Cemetery. In lieu of flowers, memorial donations in Roberta’s name can be made to the Michael J. Fox Foundation for Parkinson’s Research and can be mailed to or left with the funeral home. Services entrusted to: Countryside Funeral Home, 420 S. 20th, PO Box 247, Fredonia, KS 66736

The family of Roberta Lynn McPurdy created this Life Tributes page to make it easy to share your memories.

Send flowers to the McPurdy family.