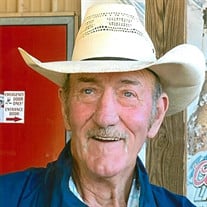 Ronald (Bo) Lee Raida Sr. age 70, of Cherryvale, KS passed away on Sunday, November 22, 2020 in Wichita, KS at Ascension Via Christi St. Francis, with his children and son-in-law at his bedside. He had bravely battled cancer for the last 6 months. Bo was born July 5, 1950 in Chanute, KS to Martin (Jr.) and Lois (Woolery) Raida of Thayer, Bo was the 2nd of 8 Children. He was raised in Thayer and attended Thayer Schools. Bo was married to Joan Tubbs Seller in 1967, they had 4 children and later divorced. He married Colleen Cook of Neodesha in 1983, and they later divorced. He married Lynn Sade of Neodesha in 1998, and they later divorced. In his life, Bo held many jobs including being one of “The Original Cowboys”, farming, ranching, oil rigger and for the last 30+ years he owned and operated his own business, Bo Raida Fencing, from which he built a whole lot of fence that some say was the straightest fence they ever saw. Throughout his life he has lived primarily within Thayer, Neodesha and Cherryvale. His greatest enjoyment was his children, grandchildren, family, his dogs and his many close friends. Through the years he enjoyed hunting, especially the long lasting family tradition of coyote hunting, fishing and all things horses. He enjoyed very much “some beers” with “the boys” and looked forward most days to his visiting sessions. He was blessed with many close friends that he considered family, it is said that to know him was to love him and most did, especially children, they seem to gravitate towards him. Bo was known by all for his huge heart and his willingness to help anyone that needed it or asked, regardless of the situation. Bo was a member of the Eagles Neodesha for many years, and recently became a member of the Thayer Christian Church. Bo is survived by his children Misty O’Brien and husband Dan, Jody Brown and husband Charlie of St. Paul, KS, Megan Jones and husband Jerry of Erie, KS and daughter in law Krissy Raida of Buffalo, KS. His mother Lois Raida of Thayer, Sisters Connie Helt (Nick) of Dennis, Deann Dean (John) and Nancy Trout (Darren) of Thayer, Brothers Randy (Tish) Raida, Lynn (Michelle) Raida, Delmer (Shelly) Raida all of Thayer. His 19 grandchildren; Christel Martin, Abby Gold, Heather Sinclair, Erin Jordan, Elizabeth Arthur, Levi Clark Raida, Alyssa Raida, River Raida and Saylor Raida, Shay, Renee, Billy and Khloe Brown and Dustin and Dillon Blackmore, Caleb, Gage, Gunner and Nevaeh Jones, 22 great grandchildren and many nieces and nephews, all of which he adored. Bo was preceded in death by his only son, Ronald (Skeeter) Raida Jr, his longtime companion Donna Gaddy, his sister Ila Raida Swartz, his father Junior Raida, and paternal and maternal grandparents. There is no single thing in his family that is more important or cherished than family. There will be a huge hole in all our hearts. We will proudly carry on his legacy and love. Funeral services will be held on Saturday, November 28, 2020 at 11:00 am at the Thayer Christian Church. Visitation will be held Friday, November 27, 2020 from 5-7 PM at the church. Private family burial will be held at a later date. Memorials have been suggested to either the Thayer Christian Church and or the Thayer Christian Church Preschool and can be left with or mailed to the funeral home. Online condolences may be left at www.countrysidefh.com. Services entrusted to; Countryside Funeral Home 101 N. Highland, Chanute, KS 66720

Ronald (Bo) Lee Raida Sr. age 70, of Cherryvale, KS passed away on Sunday, November 22, 2020 in Wichita, KS at Ascension Via Christi St. Francis, with his children and son-in-law at his bedside. He had bravely battled cancer for the last 6... View Obituary & Service Information

The family of Ronald (Bo) Lee Raida created this Life Tributes page to make it easy to share your memories.

Send flowers to the Raida family.