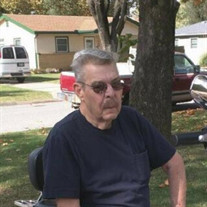 Roy Carlton Brown, age 78 of Wichita, KS passed away Sunday, August 15, 2021 at St. Francis Hospital in Wichita, KS. Roy was born July 11, 1943 in Wichita, KS to Charles Raymond and Mabel Ann (Condon) Brown. He grew up alongside 2 siblings in Wichita and attending Wichita West schools. In 1960 at the age of 17, Roy joined the United States Navy, with permission from his father, and spent the next 4 years serving his country. While serving, he graduated high school. He then attended Friends University, graduating with a degree in Criminal Justice. In 1964, Roy went to work for the Wichita Police department, retiring as Captain in 1986 after serving 22 years. He then worked for the Kansas Security Exchange Commission from 1986 until 2000. In 1961, Roy was united in marriage to Polly Brewster. They raised 3 sons, and were married 55 years until her death in 2016. They loved to fish and camp and would take family trips in the camper for two weeks at a time. They also enjoyed visiting casino’s and would take trips to Las Vegas two or three times a year. Roy is survived by his sons: Scott Brown and wife Melinda of Haysville, KS Brad Brown and wife Tina of Wichita, KS Mike Brown and wife Tine of Clearwater, KS 10 Grandchildren, and 12 Great-Grandchildren He was preceded in death by his parents, wife Polly, infant son Roy Brown Jr., brother Clarence Brown and sister Francis Hutchins Cremation has been requested, the family will hold a private graveside service. Memorial contributions can be made to the Shriners Children’s Hospital and can be mailed to or left with the funeral home. Services entrusted to Countryside Funeral Home, 420 S. 20th, PO Box 247, Fredonia, KS 66736

The family of Roy Carlton Brown created this Life Tributes page to make it easy to share your memories.